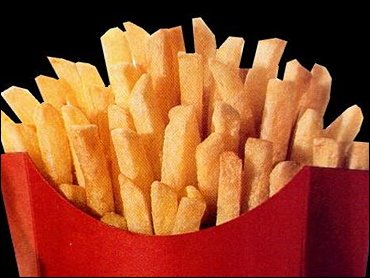 McDonald's is out with new numbers on how much fat is in its french fries.

That means the level of trans fats in a portion of large fries is eight grams, up from six, with total fat increasing to 30 grams from 25.

Often used by restaurants and in packaged foods, trans fats are thought to cause cholesterol problems and increase the risk of heart disease. The dietary guidelines for Americans that were issued by a government panel last year said people should consume as little trans fat as possible.

The disclosure comes as McDonald's Corp. starts rolling out packaging for its menu items that contain facts about their nutritional content — a move made voluntarily but with the fast-food industry under pressure from consumer groups and the government to provide more information.

McDonald's said it updated the nutrition information on its Web site last month as soon as it discovered the new level of trans fat. It explained the increase by saying an improvement in the testing process has made results more accurate.

"As part of our ongoing voluntary efforts to provide our customers with the best science-based information, we continually enhance our testing," said Cathy Kapica, global nutrition director for Oak Brook, Ill.-based McDonald's.

Michael Jacobson, executive director of the Center for Science in the Public Interest, called the change "quite a dramatic increase."

He renewed the nonprofit health advocacy group's call for McDonald's and other fast-food chains to make healthier food — and for the Food and Drug Administration to ban the use of partially hydrogenated oil, the source of trans fat. Trans fat is made when manufacturers add hydrogen to vegetable oil — a process called hydrogenation.

"Nutritionally it's a disastrous product," Jacobson said of the fries. "McDonald's could fry in canola oil or other liquid oil" as it does in Australia, Denmark and Israel, he said.

Responding to the criticism, Kapica said the company is "very proud of our menu."

"It is important to note that McDonald's menu has a wide range of choice and variety, with an array of portion sizes, including three options with french fries — small, medium and large," she said.

McDonald's has been reluctant to risk changing the taste of its iconic french fries. It pledged in September 2002 to switch to a new oil that would halve the level of harmful trans fatty acid in its fries. But it has delayed those plans, citing product quality and customer satisfaction as priorities while continuing testing.

The FDA began mandating that packaged foods companies report trans fat levels last month, but the fast-food industry is not under similar requirements.