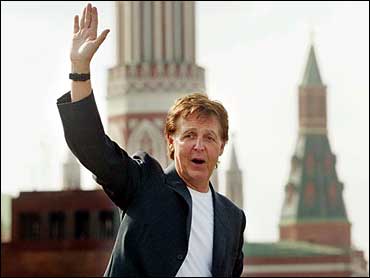 Paul McCartney kept the Russians waiting. First, until the demise of the Soviet Union. Then more than another decade. And finally an extra 20 minutes Saturday.

But when the former Beatle kicked off his Red Square concert, near Lenin's mausoleum and Stalin's grave, none of his fans seemed to hold it against him.

Diehard communists in Russia's parliament tried to cancel the British pop icon's first ever concert in the former U.S.S.R reports CBS News Correspondent Elizabeth Palmer, but thousands of Russian fans, who for years had to strain to hear his music filtered through the iron curtain, were determined to be in the audience for a concert they never thought they'd live to see.

"I've waited my whole life for this," said Vladimir Snopov, 52, of Samara, about 550 miles south of Moscow, who recalled days when the only way to hear McCartney sing was by listening to banned and often-fuzzy broadcasts over Voice of America and the British Broadcasting Corporation.

McCartney told journalists that he tried to get to Russia in the 1980s, but was told a concert here was out of the question.

Now, though, Russia bestowed royal treatment on the ex-Beatle.

McCartney met Russian President Vladimir Putin, who confessed that in Soviet times the Beatles were considered "propaganda of an alien ideology." Putin, an ex-KGB agent, had no such hang-ups Saturday, giving McCartney and his wife, Heather Mills, an anti-landmine activist, a personally guided tour of the Kremlin.

And when McCartney asked the Russian president if he'd listened to Beatles music as young man, Putin replied, "Yes, or course — it was wildly popular... It was a taste of freedom; a window on the world."

Later, McCartney serenaded Putin with "Let it Be."

McCartney also pulled off the remarkable coup of commandeering the main portion of Red Square for the evening — usually rock bands are relegated to lesser space. Even the upscale shopping mall GUM got into the act. It was converted into "Strawberry Fields" for a champagne and strawberry invitation-only bash.

"Good evening, Moskvichi," McCartney yelled to an estimated 20,000 fans — a mixed crowd including those who arrived in chauffeur-driven Mercedes and sailed hassle-free through the heavy security at the gates, to families and couples wearing old Beatles concert T-shirts.

Tickets ranged from about $30 to $300. With average monthly wages around $140, the concert was a splurge for many.

"I bought the cheapest ticket there was," said Irina Trifonova of St. Petersburg.

But the music was still audible far outside Red Square, and thousands of Russians took advantage of the warm weather to gather behind police barricades and listen.

McCartney told journalists before the concert that he was thrilled to be in Russia — and performing on the doorstep of the Kremlin.

"When I was a little kid growing up we didn't know much about Russia. We heard about Siberia and saw the marches pass through this square. We thought it was very military," he said.

The first-time visitor was clearly in awe of his surroundings. "It's a long way from Liverpool, isn't it," McCartney said during a sound-check ahead of the concert. And when asked where he could perform that would top Red Square, McCartney didn't hesitate: "Next stop the moon," he said.

But the concert did cause some controversy, with a few Russian lawmakers complaining that it was in poor taste to host a rock concert on Red Square, usually the scene of more sedate events.

"Who needs this," said Nadezhda Romova, gesturing disgustedly toward the stage as she clutched an icon to her chest