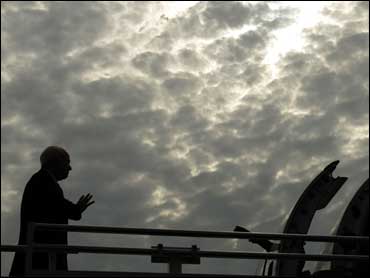 Republican Sen. John McCain called for a clean break from Bush administration energy policies on Tuesday, then promptly pivoted to accuse campaign rival Barack Obama of supporting recycled measures that failed in the past.

McCain's bid to chart a middle course on a major issue hit a bump, though, when he criticized Obama for proposing a windfall profits tax despite saying last month he would consider the same proposal.

In a speech in energy-producing Texas, McCain said the United States needs more oil than during the Arab oil embargo of the 1970s, yet produces less. Now, he warned, a single successful terror attack at an oil installation could plunge the country into an "economic crisis of monumental proportions."

With President Bush's poll ratings at historically low levels, McCain often emphasizes his differences with the current administration, and he coupled his speech with the release of a new television commercial stressing an issue that appeals to environmentalists.

"John McCain stood up to the president and sounded the alarm on global warming - five years ago," the ad states. "Today, he has a realistic plan that will curb greenhouse gas emissions. A plan that will help grow our economy and protect our environment." Aides said the commercial would run in several battleground states and on cable television over the next several days.

Democrats immediately said McCain was not credible on the issue.

"How can we trust John McCain to confront soaring gas prices or break America's dependence on foreign oil when he caved in to Big Oil on drilling and tax breaks ... and he has repeatedly opposed incentives for green jobs and renewable energy?" said Karen Finney, a spokeswoman at the Democratic National Committee.

McCain included little in the way of new proposals in his speech, other than to call for reform of the laws governing the oil futures trading market and to repeat his day-old support for an end to the federal moratorium on offshore oil drilling. He favors allowing states to decide whether to explore offshore waters.

He said he would outline additional specific measures in the next two weeks, and instead, used his speech to make the case for eliminating U.S. dependence on foreign oil, call for a break from Bush policies and criticize Obama.

"... In effect, our petrodollars are underwriting tyranny, anti-Semitism, the brutal repression of women in the Middle East, and dictators and criminal syndicates in our own hemisphere," said the Republican presidential nominee-in-waiting in his prepared remarks.

"The next president must be willing to break with the energy policies not just of the current Administration, but the administrations that preceded it, and lead a great national campaign to achieve energy security for America," he said.

McCain also reiterated his opposition to a 2005 energy bill that Bush backed and Obama voted for.

As for his Democratic rival, McCain said sarcastically, "I'm all for recycling - but it's better applied to paper and plastic than to the failed policies of the 1970's"

Instead, McCain said Obama "wants a windfall profits tax on oil, to go along with the new taxes he also plans for coal and natural gas. If the plan sounds familiar, it's because that was President Jimmy Carter's big idea too - and a lot of good it did us."

Despite his criticism, on May 5, while campaigning in North Carolina, McCain said he was willing to consider the same proposal.

"I don't like obscene profits being made anywhere. I'd be glad to look not just at the windfall profits tax, that's not what bothers me, but we should look at any incentives that we are giving to people - or industries or corporations - that are distorting the markets," he said.

A spokeswoman said McCain had neither erred in his earlier comment nor changed his mind since. "He said he is willing to look at all ideas not simply Republican or Democratic ideas," said Jill Hazelbaker, McCain's communications director.

McCain said the time has come for the United States to make a "great turn away from carbon-emitting fuels."

He called for greater use of nuclear power as well as for alternative energy sources and greater conservation measures.

"Over time, we must shift our entire energy economy toward a sustainable mix of new and cleaner power sources. This will include some we use already, such as wind, solar, biofuels, and other sources yet to be invented," he said.

"It will include a variety of new automotive and fuel technologies - clean-burning coal and nuclear energy - and a new system of incentives, under a cap-and-trade policy, to put the power of the market on the side of environmental protection," he said.