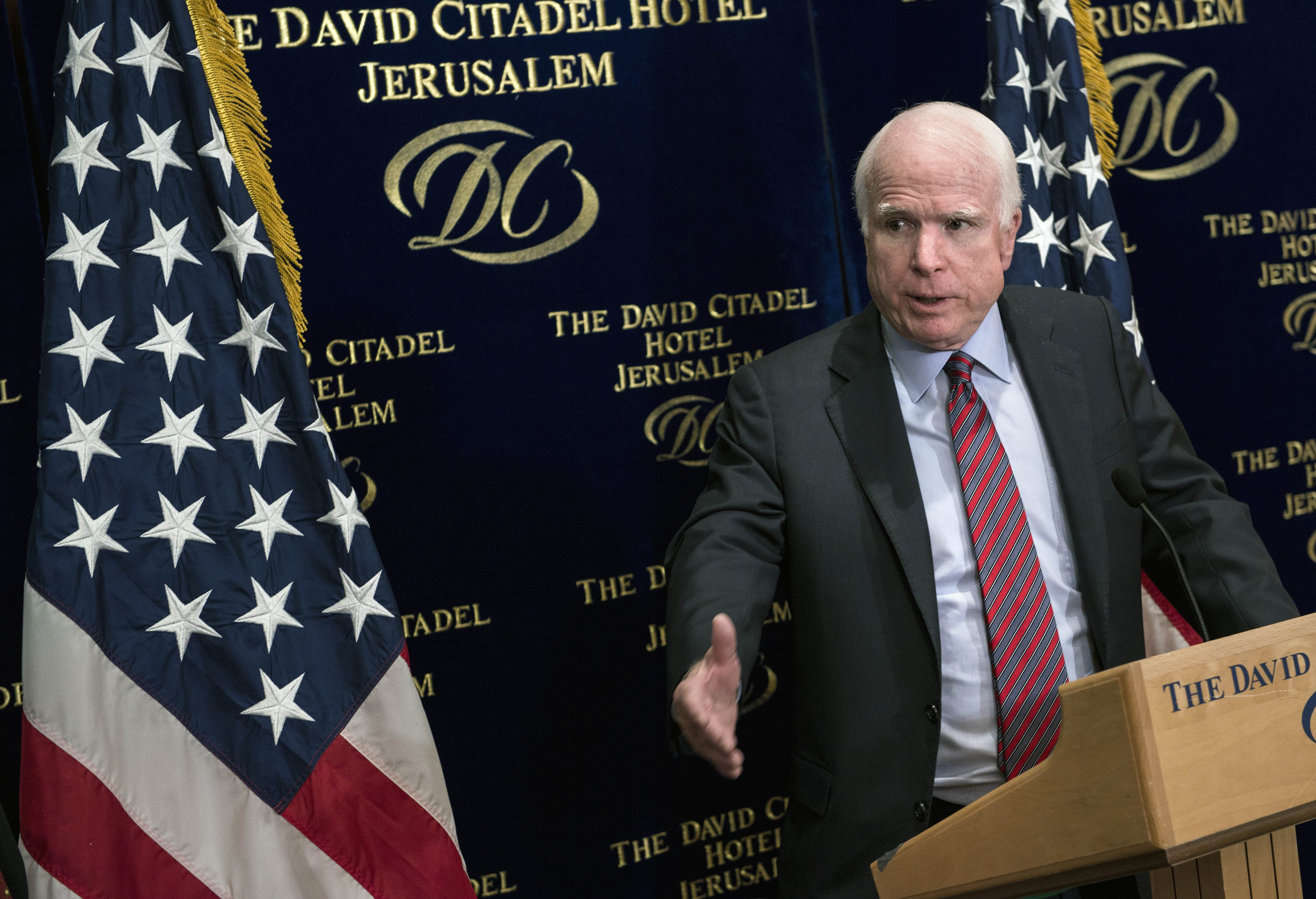 Meeting for a second consecutive day with Israeli Prime Minister Benjamin Netanyahu, Secretary of State John Kerry on Friday continued to push for more defined terms in pursuing an Israeli-Palestinian peace process. But after a meeting with the prime minister earlier in the day, three Republican senators also visiting Jerusalem sounded a more cautious note.

“We listened very carefully to the prime minister, who is responsible for the security of this nation, and listened to the concerns that he has,” said Sen. John McCain, R-Ariz., flanked by Sens. Lindsey Graham, R-S.C., and John Barrasso, R-Wyo. “We support a legitimate peace process, but we also are very concerned about some of the aspects as has been presented to us of this agreement, as to whether they are truly enforceable and viable options that does not put the state of Israel in jeopardy.”

No one, McCain acknowledged, “has worked harder than Secretary Kerry on this issue.” But, he qualified, in erecting the scaffolding for peace talks, consideration must be paid to “very serious and legitimate concerns on the part of the prime minister.”

During a press conference with Netanyahu, Kerry said Thursday at the outset of his ninth trip to the region that he realizes “many are skeptical of whether or not the two parties can achieve peace,” but that the time has come for all actors in the conflict to make some “difficult decisions.”

“We have been at this now for five months solid, into six months. I think it’s safe to say that we know what the issues are. We know the parameters of the possibilities of peace,” Kerry said. “I think we understand the circumstances under which we are working.”

At a podium opposite Kerry, Netanyahu said Israel is prepared to engage in peace negotiations, but only in conditions fertile for a true partnership with Palestinians.

“Peace means ending incitement,” Netanyahu said Thursday. “It means fighting terrorism and condemning terrorism. It means recognizing Israel as the nation state of the Jewish people. It means meeting Israel’s security needs. And it means being truly prepared to end the conflict once and for all.”

Two concerns the prime minister aired with the senators Friday, Graham relayed, are the possibility than Palestinians will seek statehood independent of the peace framework, and the looming threat of a nuclear Iran. On the latter point, McCain suggested, negotiators could move forward with more ease if President Obama would table the option of imposing further sanctions on Iran should it flout diplomatic attempts to curb its nuclear program.

“We do not understand why the president of the United States would oppose a threat of additional sanctions if the Iranians fail to negotiate in good faith,” McCain said. “I mean, it just would make sense to me that that threat should be out there and would be motivating towards a real serious negotiation and result.”

In addition to his bilateral meetings with Netanyahu and Israeli Foreign Minister Avigdor Lieberman, Kerry on Friday was scheduled to meet with the GOP senators before traveling to Ramallah in the West Bank for a meeting with Palestinian leader Mahmoud Abbas.