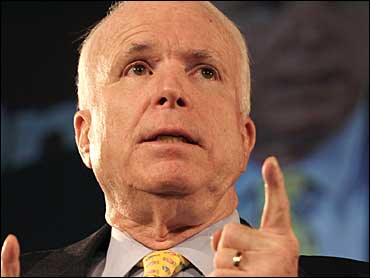 Arizona Senator John McCain has taken criticism of anti-war group MoveOn.org to a whole new level: He is suggesting that the organization "ought to be thrown out of this country."

The liberal advocacy group angered Republicans earlier this week with a full-page ad in the New York Times criticizing Gen. David Petraeus as he prepared to testify before Congress. The ad, which asserted that Petraeus was "cooking the books" on the situation in Iraq carried the headline, "General Petraeus or General Betray Us?"

Republicans condemned the ad and the party's presidential candidates have taken it up as a cause on the campaign trail. The campaign of Former New York City Mayor Rudy Giuliani took out its own ad in the Times criticizing MoveOn and tying the organization to Hillary Clinton. McCain has begun carrying a blown-up, laminated poster of the MoveOn ad to his campaign stops.

And speaking at an event in Hudson, New Hampshire last night, CBS News' Dante Higgins reports he once again displayed the ad and said: "It's disgraceful, it's got to be retracted and condemned by the Democrats, and MoveOn.org ought to be thrown out of this country."

Today, the McCain campaign clarified the senator's comments for CBS News. "Senator McCain, like most Americans, is appalled by the MoveOn.org ad. Last night he expressed his outrage in words that did not convey his intended meaning. What he meant to say was that MoveOn's smear of General Petraeus' character should have no place in the American political debate."