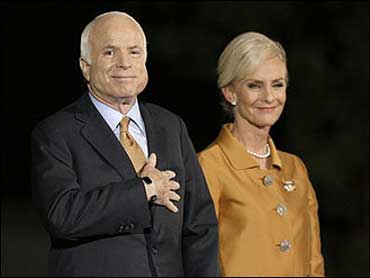 Before resting from the grueling presidential race, John McCain began discussing with senior aides what role he will play in the Senate now that he has promised to work with the man who defeated him for president.

Democrats, who padded their majorities in the House and Senate, have a suggestion: McCain can mediate solutions to partisan standoffs on key legislation as he did to help avert a constitutional meltdown over judicial confirmations in 2005.

"There's a need for the old John McCain, a leader who worked in a bipartisan way," Sen. Chuck Schumer, D-N.Y., said Wednesday.

GOP leaders, never fond McCain's independent streak or blunt style, nonetheless are reaching out to keep him in the fold and keep Republican ranks as robust as possible during the next Congress, two knowledgeable GOP officials said on condition they not be named because the conversations were private.

One obvious focus will be the war in Iraq. After two years spent more on the campaign than in the Senate, McCain will return as the ranking Republican on the Armed Services Committee. That will put the four-term Arizona senator in a position to influence Democrat Barack Obama's plan to set a timetable to withdraw U.S. troops from combat in Iraq.

"That would be good," Sen. Jim DeMint, R-S.C., said in a telephone interview. "I would love to see McCain work with President Obama in dealing with Iraq in a way that Republicans and Democrats could agree on."

During the campaign, McCain staunchly opposed setting such a time frame, even as the Iraqi government began working with the Bush administration to do so.

But in conceding the presidency to Obama Tuesday night at a Phoenix hotel, McCain pledged "to do all in my power to help him lead us through the many challenges we face."

He allowed that defeat was disappointing but said that starting Wednesday "we must move beyond it and work together to get our country moving again."

Aides said they believed McCain would work well with Obama as president because much of his best work in the Senate had been done with Democrats, including a landmark campaign finance law he crafted with Wisconsin Sen. Russ Feingold and an unsuccessful effort with Massachusetts Sen. Edward M. Kennedy to pass comprehensive immigration reform.

The day after Election Day quickly returned McCain to something much closer to normal life. After months of travel on his campaign bus or plane, McCain and his wife, Cindy, drove themselves to Starbucks for coffee near their Phoenix condominium.

McCain and his family planned to spend a few days at their vacation compound near Sedona, Ariz., to rest from the long contest.

Friends said that despite his disappointment, McCain also was relieved that the demanding campaign was finally over. Aides said he was relaxed Tuesday night - at peace with his loss and confident that he had done his best in a political climate where a failing economy, an unpopular GOP president and two lingering wars set steep odds against a Republican victory.

"We fought as hard as we could. And though we fell short, the failure is mine, not yours," McCain told supporters Tuesday night. "I don't know what more we could have done to try to win this election. I'll leave that to others to determine."