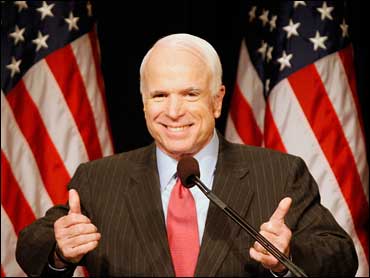 "I don't think it's going much lower, and it could go higher," McCain said on NBC's "Today Show." "I don't think so, not when you've got a finite supply, basically, and a cartel controlling it."

Although the GOP presidential candidate didn't address the question of raising taxes on oil companies, he said the companies "absolutely" should return some profits to consumers. "And they should be embarking on research and development that will pay off in reducing our dependence on foreign oil," he said.

"The point is, oil companies have got to be more participatory in alternate energy, in sharing their profits in a variety of ways, and there is very strong and justifiable emotion about their profits," McCain said.

The issue of oil company profits came up this week in the Senate, where Republicans stopped the Democrats from imposing a tax on windfall profits and taking away billions of dollars in tax breaks in response to the $4-a-gallon price of gas.

In the past McCain has indicated he would consider such a tax proposal, saying he didn't want to see companies making "obscene profits" that distort the market.

McCain used the opportunity to bring up his proposal for a gas tax holiday that would suspend the federal tax of 18.4 cents per gallon, a proposal that Democratic rival Barack Obama dismisses as a gimmick. Critics say that cutting the price would only increase demand, which would lead to higher prices again.

In the interview, McCain said President Bush's strategy to increase the number of troops in Iraq last year is working. McCain has been an ardent supporter of the Iraq war, but he criticized the early handling of the war, saying Mr. Bush did not send enough troops initially. In fact, he challenged the characterization that the strategy of increasing troop levels was Mr. Bush's: "May I correct that statement? I advocated the surge policy before President Bush."

McCain was asked if, since he argues the strategy is working, he has a better estimate for when U.S. troops could leave Iraq.

"No, but that's not too important," McCain said. "What's important is casualties in Iraq.