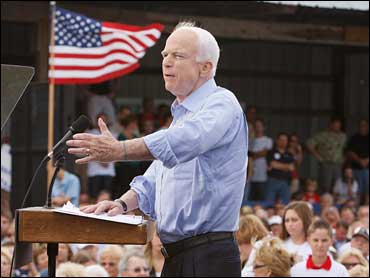 Presidential candidate John McCain isn't happy about having to explain why the Republican Party has had to buy running mate Sarah Palin $150,000 in clothes, hair styling and accessories.

McCain was asked several questions on Thursday about the shopping spree — and he answered each one more or less the same way: Palin needed clothes and they'll be donated to charity.

Asked for details on how they'll be donated, McCain said, "It works by her getting some clothes when she was made the nominee of the party and it will be donated back to charity."

Asked if he was surprised at the amount spent, McCain said, "It works that the clothes will be donated to charity. Nothing surprises me."

McCain offered no further comment, except to say that the Republican National Committee doesn't buy his clothes.

News of the purchases, largely from upscale Saks Fifth Avenue and Neiman Marcus, contrasts with the image Palin has crafted as a typical hockey mom.

Asked Wednesday who had paid for the suit he was wearing, Democratic vice presidential candidate Joe Biden told WSLS-TV in Roanoke, Va.: "I pay for my suits. I pay for all of my own clothing."

They spent more, that's the element," McCain said. "If it's true — organization. But we've energized volunteers, we'll get our vote out."

He then criticized Obama for not accepting public campaign financing after initially indicating he would. That means he can raise and spend as much as he can, and he's doing so at a clip of about $5 million a day. McCain did accept public financing and can no longer raise money. Obama began October with $134 million in the bank, compared to $47 million for McCain.

"He told the American people something that was patently false and then he's raised a whole lot of money and the implications of that for future presidential elections should be very disturbing to every American. One thing we've shown in history — you get unlimited amounts of money into political campaigns, you get corruption and you get scandals," McCain said.

At one point in the interview, McCain grew frustrated with a Tampa television reporter during her questions on immigration issues. McCain twice said illegal immigrants who have committed crimes would be rounded up. Katie Coronado of WFLA-TV asked if that meant using raids to round up immigrants.

"What did I just say that had any connotation of raids?" McCain said, raising his voice with impatience. "Let me try one more time."

"I apologize," he said to Coronado. "I understand how important an issue it is. I didn't mean to be flip."

McCain was in Florida to kick-off a a cross-state bus tour aimed at keeping vote-rich Florida from swinging to the Democrats. At a campaign stop, he accused Obama of saying "anything to get elected."

The Arizona senator said Obama had added a work requirement to his proposal to grant a 10 percent universal mortgage credit. A top Obama aide said the campaign added the requirement two weeks ago to avoid charges that the proposal provided "welfare" to non-working Americans.

"Thirteen days to go, and he changed his tax plan because the American people had learned the truth about it and they didn't like it," McCain told a crowd at lumber yard. "It's another example that he'll say anything to get elected."

An Obama spokesman accused McCain of distortion and said the Democrat's plan always included a work requirement, although it was discussed only within the campaign or to reporters who inquired about the particulars of the plan.

"Last week, Sen. McCain called Obama's tax cuts for working people welfare. Today he's claiming Sen. Obama doesn't do enough to help the unemployed," said Obama spokesman Tommy Vietor. "The only thing consistent about these attacks is how dishonest they are. All of Sen. Obama's tax credits only go to workers and they always have."

While criticizing Obama, McCain also targeted his own party. He complained the Bush administration was not yet buying up mortgages so homeowners facing foreclosure could renegotiate them at a more favorable interest rates. The GOP nominee has proposed a $300 billion plan, but a similar one is included in the $700 billion Wall Street bailout recently passed by Congress. Both McCain and Obama voted for that plan.

"I call on the administration to act now and buy up these mortgages and keep people in their homes," McCain said before singling out Treasury Secretary Henry Paulson. "And why is the secretary of the Treasury not ordering them to do that?"

The bus tour is targeting blue-collar Florida workers who are like the Ohio plumber, Joe Wurzelbacher, who has become the central thematic element in speeches by McCain and Palin.

From Ormond Beach on the Atlantic Coast to Sarasota on the Gulf Coast, McCain was criticizing Obama's tax plans and promoting his own proposals to cut taxes for individuals and businesses. After his stop at All Star Building Materials, he was moving on to a doctor's office, a restaurant and a farm.

"Whether it's Joe the Plumber in Ohio or Joe over here," McCain said, pointing into the crowd, "we shouldn't be taxing our small businesses more, as Sen. Obama wants to do. We need to be helping them expand their businesses and create jobs."

Obama, speaking Wednesday in Virginia, rebutted such criticism, arguing that his tax plan would not raise taxes on small businesses and working couples earning less than $250,000 a year.

McCain's route not only covered the vote-rich "I-4 Corridor" through Orlando, in central Florida, but included informal stops between the more formal rallies. The goal was to boost McCain in a state George W. Bush won in 2000 and 2004 but which Obama is threatening to seize despite a strong GOP machine and the Arizona senator's endorsement by Gov. Charlie Crist.

Florida offers 27 electoral votes, fourth-most in the country. A total of 270 is needed to win the presidency.

Recent polls show Obama, a first-term senator from Illinois, with a slight lead over McCain. Nationally, an Associated Press-GfK poll shows McCain and Obama essentially even among likely voters, possible evidence of a tightened race 12 days before the Nov. 4 election.

McCain's first stop in Florida, for coffee with Crist and three business owners from the Daytona Beach area, proved fruitful. Mike Murray, owner of the Starlite Diner, said he was concerned about both candidates raising taxes but planned to support McCain on Election Day.

"He's got the experience," Murray said as the candidate sat at a nearby booth. "I'm comfortable with him. I grew up knowing his name."