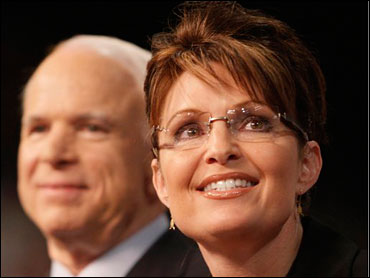 Republican John McCain, whose running mate disclosed that her unmarried 17-year-old daughter is pregnant, has opposed proposals to spend federal money on teen-pregnancy prevention programs and voted to require poor teen mothers to stay in school or lose their benefits.

Alaska Gov. Sarah Palin's announcement Monday about her daughter, Bristol, was aimed at rebutting Internet rumors that Palin's youngest son, born in April, was actually her daughter's. Palin said her daughter intends to raise her child and marry the baby's father, who was identified only by his first name, Levi. The baby is due in late December.

McCain's record on issues surrounding teen pregnancy and contraceptives during his more than two decades in the Senate indicates that he and Palin have similar views. Until Monday, when the subject surfaced in a deeply personal manner, teen pregnancy and sex education were not issues in the national political campaign.

Palin herself said she opposes funding sexual-education programs in Alaska.

"The explicit sex-ed programs will not find my support," she wrote in a 2006 questionnaire distributed among gubernatorial candidates.

McCain's position on contraceptives and teen pregnancy issues has been difficult to judge on the campaign trail, as he appears uncomfortable discussing such topics. Reporters asked the presumptive GOP presidential nominee in November 2007 whether he supported grants for sex education in the United States, whether such programs should include directions for using contraceptives and whether he supports President Bush's policy of promoting abstinence.

"Ahhh, I think I support the president's policy," McCain said.

The McCain campaign on Monday did not respond to repeated requests for information.

In 2005, McCain opposed a Senate Democratic proposal that would have spent tens of millions of dollars to pay for pregnancy prevention programs other than abstinence-only education, including education on emergency contraception such as the morning-after pill. The bill also would have required insurance companies that cover Viagra to also pay for prescription contraception.

McCain voted for the Family Support Act in 1988, which passed overwhelmingly in the Senate and required teen mothers who receive public assistance to remain in high school and, in some cases, to live with their parents.

"Young parents who have not completed high school will be required to stay in or return to school to complete the basic education so necessary to a productive life," said President Reagan, as he signed the law in October 1988.

McCain cited abortion, sex education and birth control as some of the issues on which he differed with Joycelyn Elders, former President Clinton's nominee for surgeon general. He quoted Elders as telling lawmakers that abortion has had positive health effects, including reducing the number of children "afflicted with severe defects."

"As a father of a number of young children, including an adopted daughter who was born with a birth defect, I am deeply, deeply troubled by these views," McCain said in a 1993 speech opposing Elders' confirmation.

Palin's fifth child, a son named Trig, was born in April with Down syndrome, a genetic abnormality that impedes physical, intellectual and language development. Conservatives supportive of Palin as McCain's running mate have praised her choice to deliver Trig even after the family learned about his condition during prenatal testing.

McCain said the country unarguably had a problem with teen pregnancy, but said Elders' approach would only make it worse. He said Elders started a program to distribute condoms in schools, but the rate of teen pregnancy actually rose in those counties. When it turned out many of the condoms were defective, Elders decided to continue the program rather than halt it or inform the public of the risk, McCain added.