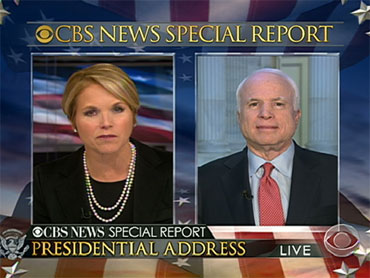 McCain, R-Ariz., said that Obama "made the right decision to have a properly resourced counterinsurgency strategy" and that the addition of 30,000 U.S. troops plus an unspecified number of new NATO troops "are sufficient to get the job done."

But McCain, speaking with "CBS Evening News" anchor Katie Couric following Mr. Obama's speech on Afghan strategy, said repeatedly that he disagrees with what he called "an arbitrary date for withdrawal." The Vietnam veteran often used the same phrase in reference to the war in Iraq, including during his campaign against Obama for the presidency last year.

"Success is what dictates dates for withdrawal and if we don't have that success and we only set an arbitrary date, it emboldens our enemies and disspirits our friends," McCain said.

To be clear, Mr. Obama has not set a date for withdrawal from Afghanistan. In his address to cadets at the U.S. Military Academy Tuesday, he said that the addition of U.S. and international troops will "allow us to begin the transfer of our forces out of Afghanistan in July of 2011." But, the president added, "just as we have done in Iraq, we will execute this transition responsibly, taking into account conditions on the ground."

Couric pressed McCain about how Afghan President Hamid Karzai could be pressured to act and not consider the U.S. commitment in Afghanistan open-ended without some kind of established withdrawal deadline.

McCain's' reply was a bit odd. "Hamid Karzai knows very well that if U.S. troops leave he will be leaving shortly thereafter or find himself probably assassinated," McCain said, suggesting that the Afghan leader would share McCain's opposition to withdrawal deadlines.

He went on to make a comparison to the Iraq war, where the U.S. has begun a withdrawal slated to be completed in 2011.

"The Maliki government in Iraq was incredibly weak – in fact, weaker than we believe the Karzai government is. Succeed and build the political, economic and social infrastructure after you have secured – you've provided an environment of security by the additional troops and they – and we can put enough pressure on to clean up the corruption. But the fact is if you set an arbitrary date, regardless of conditions on the ground you are sending the wrong message," McCain said. "We succeeded in Iraq and then the Iraqis asked us to leave. It was after the success, not before."