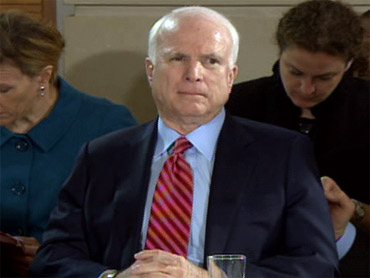 Sen. John McCain says Democrats who championed the historic health care bill that passed the House haven't heard the last of the issue, predicting reprisals at the polls and in the courts.

The Arizona Republican declared that Republicans "will challenge it every place we can," and called the measure, approved on a 219-212 vote, "terribly wrong for America." He said he was repulsed by "all this euphoria going on" and argued that "outside the Beltway, the American people are very angry. They don't like it and we're going to repeal this."

The Senate bill is primed to become law once President Obama signs it, but the Senate must still pass the reconciliation bill that will alter the main bill in order for Democrats' work on health care to be over. Among other things, the bill would strip the Senate bill of politically-toxic provisions like the so-called "Cornhusker Kickback."

Republicans, however, plan to obstruct the process every way they know how, from offering hundreds of amendments to challenging whether elements of the bill are allowed under the rules of the special process of reconciliation. For anyone who may have expected Republicans to give up their opposition after last night's vote, Sen. Judd Gregg (R-N.H.), the top Republican on the Senate Budget Committee, made it clear yesterday passing the reconciliation bill would be a battle.

"The last thing we should do is allow this failed policy to worsen," Gregg said in a statement. "The reconciliation bill was used to buy votes in the House, but that does not mean that the Senate should go along with this misguided exercise."