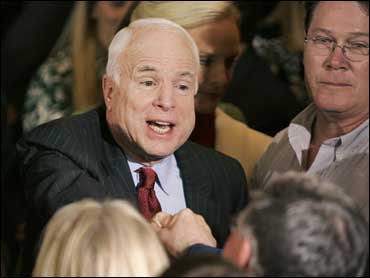 Supporters of Republican presidential candidate John McCain on Tuesday assailed a two-page attack mailer sent to newspaper editors across South Carolina that claims McCain turned on his fellow POWs to get better treatment while he was a prisoner in Vietnam.

"Nothing could be further from the truth. I know because I was there," Orson Swindle, a retired Marine lieutenant colonel and former prisoner of war, said in a statement about the mailing from a group called Vietnam Veterans Against John McCain.

"The deceitful smear tactics by such fringe elements as Vietnam Veterans Against McCain must not be allowed into the political process. We are a better people than that, and those responsible should be denounced," said Swindle said.

The anti-McCain group's organizer, Jerry Kiley, who said he also is a Vietnam veteran, said in a phone interview he has been trying to spread what he said is the truth about McCain's record for years.

"John McCain has created this myth that he is a hero and he is not," Kiley said from his home in Garnerville, N.Y.

Kiley's group cites as evidence a May 1973 U.S. News and World Report article written by McCain in which he said on his third or fourth day of captivity after his plane was shot down in 1967 that he realized his knee was so swollen the blood might pool in it and kill him. So he offered to give military information to his captors in exchange for medical treatment.

In the article, McCain said he told the story to make the point the North Vietnamese only gave medical treatment to POWs if they thought they were going to get something in return. He never writes in the article that he went through with his end of the deal.

Kiley claims McCain told the North Vietnamese about American flight routes and that led to an increase in U.S. planes shot down in the following six months.

McCain's South Carolina spokesman, B.J. Boling, on Tuesday said McCain never passed military information to the North Vietnamese and said the campaign was publicizing the attack mailer "to serve as an example of how we can bring these shadowy groups out into the open."

While Kiley's group says it includes POWs and other veterans, McCain's campaign pointed out he is supported by more than 100 admirals and generals and 75 former POWs, including the two men held for the longest time in North Vietnam.

"This kind of incredible support from those who know him best and this kind for patriotic, loyal and superb service to country reflect the truth about John McCain," Swindle said.

Kiley said his group sent its mailing to 80 newspaper editors in South Carolina. He said he is considering sending the information to editors in states with later primaries.

McCain's supporters in South Carolina have created what they call a "Truth Squad" to counter the kind of negative attacks that derailed his candidacy here in 2000.

The Republican primary in South Carolina is Saturday.