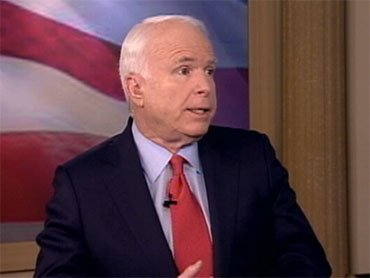 Republican Sen. John McCain today railed against conservatives who stand in opposition to House Speaker John Boehner's plan to raise the debt ceiling and reduce the deficit. He called their insistence on passing a balanced budget amendment "worse than foolish" and "bizarro."

Passing an amendment to the Constitution requiring a balanced federal budget is simply not possible with a Democratic majority in the Senate, McCain said, and to suggest otherwise is doing a disservice to voters.

"That is not fair to the American people to hold out and say we won't agree to raising the debt limit until we pass a balanced budget amendment to the Constitution," McCain said on the Senate floor today. "It's unfair, it's bizzaro. And maybe some people have only been in this body for six or seven months or so really believe that."

Boehner's plan to raise the debt ceiling would call for the House and the Senate to vote on a balanced budget amendment -- but not necessarily pass it. Democrats have dismissed Boehner's plan as a "big wet kiss" to the Tea Party and impossible to pass in the Senate. Even so, some of the most conservative members of the House are saying Boehner's plan doesn't go far enough.

McCain has come out in support of the GOP's earlier deficit plan -- "cut, cap and balance" -- which would have made raising the debt ceiling contingent upon the passage of a balanced budget amendment in Congress. Still, McCain said today that it's not worth risking letting the U.S. default on its loans to push for the amendment.

The White House and the Treasury Department maintain that the U.S. risks defaulting if the debt ceiling isn't raised by August 2.

"The idea seems to be that if the House GOP refuses to raise the debt ceiling, a default crisis or gradual government shutdown will ensue and the public will turn en masse against Barack Obama," McCain said, quoting a Wall Street Journal op-ed. "Then Democrats would have no choice but to pass a balanced budget amendment and reform entitlements and the Tea Party Hobbits could return to Middle Earth."

"This is the kind of crack political thinking that turned Sharron Angle and Christine O'Donnell into GOP Senate nominees," McCain continued, still quoting the Wall Street Journal in reference to the two failed 2010 Senate candidates.

By rejecting the Boehner plan, McCain warned, conservatives would not only undermine the speaker but also "go far to re-electing Mr. Obama and making the entitlement state that much harder to reform."

This article was updated to clarify that in part of his remarks today, McCain was quoting a Wall Street Journal op-ed.