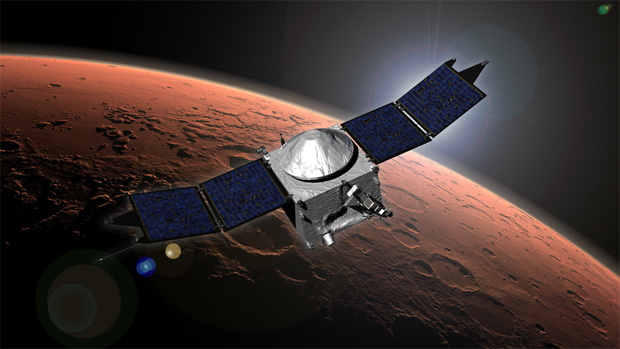 Ten months and 442 million miles outbound from Earth, NASA's MAVEN spacecraft fired its braking rockets Sunday to slip into orbit around the red planet, kicking off a $671 million mission to find out how much of the martian atmosphere leaked away in the distant past in an extreme case of climate change.

"What a night! You get one shot at Mars orbit insertion, and MAVEN nailed it tonight," said NASA project manager David Mitchell. "We've got a really happy crew in the building here, across the country and literally around the world."

Launched from Cape Canaveral atop a United Launch Alliance Atlas 5 rocket on Nov. 18, 2013, MAVEN's six engines ignited at 9:38 p.m. EDT, slowing the 2.5-ton spacecraft by about 2,750 mph to let the planet's gravity capture it in a roughly 35-hour elliptical orbit as planned.

After the burn, MAVEN re-oriented itself to aim its high-gain antenna back toward Earth, re-establishing a faster data link to give flight controllers a more detailed look at the spacecraft's performance. While that work was still in progress when a NASA news conference got underway, a preliminary look at the data showed the spacecraft was healthy and operating normally.

Speaking from spacecraft-builder Lockheed Martin's control center near Denver, Mitchell said the MOI rocket firing ran just 11 seconds longer than predicted, "which means MAVEN nailed it. Right on the money." The data from the spacecraft backed that up. The low point of the resulting elliptical orbit was very close to 236 miles, almost exactly what was expected.

"The preliminary look is that all systems seem to be healthy, we don't see anything that shows a problem," said Guy Beutelschies, MAVEN program manager with Lockheed Martin.

Flight controllers will spend the next six weeks checking out MAVEN's instruments, deploying booms and antennas and fine-tuning its orbit, firing the spacecraft's thrusters five more times to lower the high point to around 3,860 miles and the low point to less than 100 miles.

During this so-called transition phase, the spacecraft will be used in concert with other Mars orbiters for a once-in-a-lifetime opportunity to study a comet during a close flyby. Comet C/2013 A1, known as Siding Spring, will pass within about 82,000 miles of Mars on Oct. 19, a remarkably close encounter expected to happen once in a million years.

"We are going to take advantage of this bonus opportunity to do science, and we'll be making observations of the comet itself and the Mars upper atmosphere before and after the comet arrives," Bruce Jakosky, MAVEN principal investigator at the University of Colorado, Boulder, in a pre-arrival news conference.

"We should learn a lot about the upper atmosphere from this natural experiment, watching the perturbation from the impact of gas and dust, and we're hoping to learn about the comet as well," he said.

But the primary goal of the Mars Atmosphere and Volatile Evolution -- MAVEN -- spacecraft is to study the martian atmosphere, repeatedly flying through its upper reaches to sample its constituents, map out its structure and measure how solar radiation and electrically charged particles from the sun affect its evolution.

Mars does not have an active magnetic field to shield the planet from the effects of such high energy radiation, which may act to carry away atoms and molecules in the upper reaches of the atmosphere.

"The evidence shows that the Mars atmosphere today is a cold, dry environment, one where liquid water really can't exist in a stable state," Jakosky said. "But it also tells us the ancient surface had liquid water flowing over it and we see evidence for lakes, for river channels, a lot of evidence for liquid water that required a very different climate than the one we have today.

"What that leads us to ask is, where did the water go? Where did the CO2 (carbon dioxide) go from that early environment? And it can go to two places, it can go down into the crust or it can go up to the top of the atmosphere where it can be lost to space."

MAVEN's instruments were designed to help scientists figure out "the extent to which stripping of gas out of the atmosphere to space may have been the driving mechanism of climate change."

"We study the top of the atmosphere because that's the place where the gas that is escaping resides, and it's a conduit through which the gas has to traverse as it goes from the lower atmosphere to the top where it can be stripped away by the solar wind or by other processes," Jakosky said.

"The question is whether over long periods of time this process, or any of the other processes that are operating, has been responsible for removing a lot of the gas. This is the major question we want to address."

The MAVEN spacecraft measures 37.5 feet across its two solar panels, weighs more than 5,000 pounds and is equipped with eight primary instruments and UHF radio gear designed to relay data back to Earth from rovers on the martian surface.

Six of its instruments will measure particles and fields, mapping out the interaction of the atmosphere with electrically charged particles from the sun and the impact of solar radiation. Two other instruments will carry out remote sensing and chemical analysis of particles in the red planet's atmosphere.

In addition, India's Mars Orbiter Mission, or MOM, is expected to brake into orbit Wednesday.

NASA also operates two rovers on the surface, the Mars Exploration Rover Opportunity, launched in 2003, and the nuclear-powered Mars Science Laboratory, or Curiosity, launched in 2011. Both rovers use Odyssey and MRO to relay science data back to Earth and to receive commands from flight controllers. MAVEN is equipped with similar relay gear and will serve as a backup for use as needed.

The over-arching goal of NASA's Mars exploration strategy is to characterize the past and present habitability of the planet, to look for signs of the organic compounds that are necessary for life as it is known on Earth and, eventually, to figure out whether life ever evolved on the fourth planet from the sun.

"Life by itself is not easy to identify, it's not easy to understand," said Jakosky. "And we're trying to understand the context in which life might have existed. Any life on Mars interacts with its planetary environment, we need to know what that environment is and how it's evolved over time.