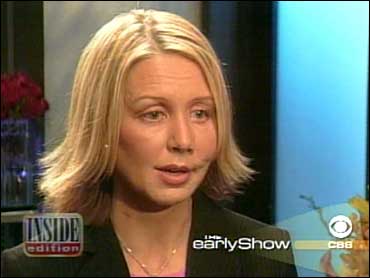 Four months ago in California's Santa Ana Mountains, a mountain lion went on a deadly rampage.

The 110-pound cougar killed one man and horribly maimed a woman named Anne Hjelle, who narrowly escaped with her life. Now for the first time, she is telling her story in an interview with "Inside Edition's" Deborah Norville.

Caller: We got a lady that is attacked by a mountain lion on her face. Her face is almost gone. She is in bad condition. I need people out.

Caller: She is in bad condition. I would get somebody here now!

Hjelle recalls, "He pulled and tore away at the flesh on my face. I thought this is it."

Hjelle is a fighter. A former Marine, she fought a battle that even her military training couldn't prepare her for after she was attacked by a mountain lion in January while biking with her friend, Debby Nichols, in the hills of Southern California.

Nichols bravely held onto Hjelle's legs as the mountain lion pulled her off the trail and into the thick brush.

Right after the attack in an interview Nichols explained the incident, "I was holding on to her the whole time. He would not let go. He had a hold of her face."

Hjelle says, "He was going for my neck and his goal, as it would be with any type of prey, was to break my neck and paralyze me."

The pain must have been excruciating.

"I had no pain," Hjelle says. "I didn't feel pain at the time. But I felt just the strength of it."

But Hjelle was terrified and fully aware that the lion had just torn away half her face.

"My first thought was, 'I want to die,'" Hjelle says. "You think about the fact your face is ripped off."

But more help was on the way. Two other bikers, Mike Castellano and Mils Magnuson, were also riding that day when they heard screams for help. While Nichols held onto Hjelle's legs, the men threw rocks, anything they could find, to scare off the lion. Finally, it released its powerful grip and backed off.

The men carried Hjelle back up to the trail and called 911. The lion continued stalking from the brush as the desperate group waited for help to arrive. Hjelle, who had passed out fighting lion, was now conscious.

Asked what she was thinking at that time, Hjelle says, "The one thing I was worried about, I could feel a lot of blood, see a lot of blood, and I knew this part of my face was really in tough shape. So my biggest concern, initially, was to see if I could see."

It was a miracle that, with her face so badly damaged, Hjelle's eye was unharmed. But she was still terribly injured and her rescuers were terrified that the lion was coming back. The caller, Magnuson, told the operator she might not be the only victim.

Twenty excruciating minutes later, help arrived. While Hjelle was airlifted to the hospital, police and park rangers went hunting for the lion. What they discovered was chilling. It was Mark Reynolds, who owned the bike left standing by the side of the trail near the area where Hjelle was attacked. When police tracked down and shot down the mountain lion, it was hovering near Reynolds' partially eaten body.

At Mission Regional Hospital in Orange County, surgeons operated on Hjelle for more than five hours on the night of the attack. Tying as many as 2,000 stitches, they slowly pieced Hjelle's face back together.

Hjelle says, "I never have said, 'Why me?' I'm not concerned about the scars. I'm just thankful to be alive. I just know God will get me through it. And He's never going to give me more than I can handle. And, wow, if He thought I could handle this, it's big."