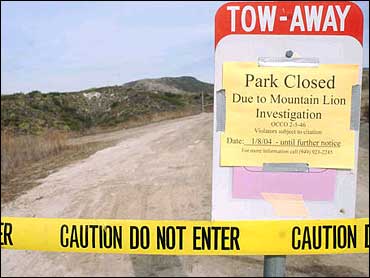 Anne Hjelle was bicycling along a wilderness trail when a mountain lion sprang from the brush, pounced on her back and dragged her off by the head as fellow bikers threw rocks at the animal and tried to pull her away.

The cougar finally ran off, leaving Hjelle — a former Marine who works as a fitness instructor — bloody and near death.

"This guy would not let go. He had a hold of her face," said Debbie Nichols, who was riding with Hjelle and held on to her friend during a desperate tug-of-war with the cat.

Authorities suspect the same mountain lion also killed 35-year-old Mark Jeffrey Reynolds, an amateur mountain bike racer whose half-eaten body was found Thursday in the park near his disabled bike. He had apparently been killed earlier in the day.

"The chains fell off and somehow broke, and while he was attempting to fix his bike is when the attack happened," said Jim Amormino, a spokesman for the Orange County Sheriff's Department.

"We know that because we found a small link to that chain a few yards away," Amormino told CBS News Correspondent Chris Lawrence.

The two attacks shocked people in Southern California and reminded them of the dangers of the outdoors in places where suburban sprawl has encroached on the wilderness.

A 2-year-old male mountain lion, which weighed about 110 pounds, was shot and killed Thursday night after it returned to where Reynolds' body was found.

Tests were still being done to determine if the same animal was to blame for both attacks. "In all probability it is," Amormino said.

California has had only 13 mountain lion attacks on humans — six of them deadly — in the past 114 years, said state Fish and Game Department biologist Doug Updike.

The park where the attacks occurred is in an area of Orange County bordered by Cleveland National Forest and several residential developments, and is designated as a wildlife habitat.

"As long as mountain lions walk this earth, there is going to be some risk from them," said Lynn Sadler, executive director of the Mountain Lion Foundation, a nonprofit group dedicated to saving America's lions. "It's not an amusement park — the shark doesn't pull back at the last second. The risks are real, even as they are part of the appeal."

Officials said the lion may have fled areas devastated by wildfires and been roaming unfamiliar territory.

The lion that attacked Hjelle dragged her from the bike trail into a ravine. Nichols screamed for help and grabbed Hjelle's legs to free her while other cyclists threw rocks at the cat until it fled.

Jacke Van Woerkom said she was riding behind Hjelle and Nichols and later spoke to Nichols at the hospital.

Sadler said fighting back was the right thing to do: "Predators can't afford to get hurt. If you fight back, you don't seem like prey to them."

Reynolds worked at a sports management firm and had won bike-race championships in his age category.

"My conciliation is Mark Reynolds was doing what he loved the most, and that was riding his bicycle," said his mother, Dona Reynolds.

Updike estimates there are between 4,000 and 6,000 adult lions roaming California. State law prohibits hunting or killing them.