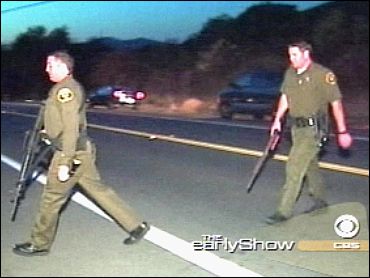 A mountain lion was shot and killed after it attacked two bicyclists in an Orange County park, critically injuring one woman in what authorities said was the 13th such incident in California since 1890.

The 2-year-old male cat may also have mauled to death a man whose body was found nearby, said Steve Martarano, a spokesman for the California Fish and Game Department.

Throughout the night, sheriffs and wildlife officials searched from the air and armed themselves with rifles on the ground in their hunt for the mountain lion, reports Joel Connable of CBS station KCBS. Just after 8:30 p.m., they found it. They shot it and killed it. They're testing it to make sure this is actually the cat involved in the attack on the cyclists.

"We are pretty confident that this lion was responsible for the attack (on the bikers)," Martarano said.

The attack on the bikers occurred shortly after 4:30 p.m. Thursday in Whiting Ranch Wilderness Park when the mountain lion pounced on a woman who was riding a bicycle with her friend, said Orange County Fire Capt. Stephen Miller.

The lion grabbed Anne Hjelle, 30, by her head and began dragging her. Her friend, Debbie Nichols, screamed for help and grabbed the victim's legs in a struggle to free her.

"This mountain lion jumped on her back and started dragging her," Nichols said. "He dragged us down ... about 100 yards into the brush and I just kept screaming. This guy would not let go. He had a hold of her face."

Mike Castellano and Nils Magnuson, who were also biking in the park, were among the first to come to the aid of Hjelle and Nichols and described the scene on CBS News' Early Show.

"Well, basically, Nils was the first one to arrive where the girls were off their bikes. And, you know, Debbie was yelling at us. She was hanging on to Anne's legs and the mountain lion had Anne's head, her face in its jaws and it was a tug-of-war," Castellano said. "At that point, you know, Nils called 911 and picked up a rock and threw it. I picked up two rocks and the first rock I hit in the rear hindquarters of the mountain lion and it didn't move with these first two rocks. The third one I hit in the front shoulder and that's when it finally let go and ran into the brush."

Hjelle was airlifted to Mission Hospital, where her condition was upgraded to serious early Friday, a nursing supervisor said. She had been listed as critical.

After the attack, the body of an unidentified man in his 30s was found at the top of a trail near a bicycle. Authorities weren't sure how long he had been there and couldn't confirm if the man was killed by the mountain lion, but Miller said, "it's pretty obvious that an animal was involved." An autopsy was planned Friday.

Authorities said a second mountain lion in the area was hit by a car and killed late Thursday and would also be tested.

The park, a popular choice among mountain bikers, has been closed at least until the results of the tests on the mountain lion are known.

Including Thursday's incident, there have been 13 mountain lion attacks on humans in California over the past 114 years, five of them fatal, said Doug Updike, a biologist with the state Fish and Game Department.

In 1986, 5-year-old Laura Small was attacked while looking for tadpoles with her mother in Ronald W. Caspers Wilderness Park in Orange County. The girl's skull was partially crushed and she was left blind in one eye and paralyzed on her right side.

A 6-year-old boy was mauled in the same park a few months later. County supervisors closed most of the park to children for nearly a decade afterward.

Updike estimates there are between 4,000 and 6,000 adult lions roaming the Golden State, with usually five to seven mountain lions per 100 square miles. State law prohibits hunting or killing them.