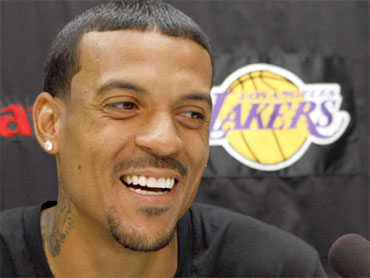 Deputies arrested Barnes after responding to what was termed an incomplete 911 call from a residence around 4:16 p.m., according to sheriff's spokesman Sgt. Tim Curran.

Deputies found Barnes and a woman both with visible injuries, but took Barnes into custody after determining he had been the primary aggressor, said Curran.

The name of the woman was not released, but she was described as "a woman who lived with him and with whom he had a dating relationship."

Barnes was booked into the Sacramento County Jail on suspicion of domestic violence and maliciously obstructing the use of a telephone line.

He posted a $50,000 bond and was released. He is scheduled to be arraigned on Sept. 13, according to authorities.

Barnes, 30, signed a two-year contract worth $3.6 million with the Lakers in July as a free agent.

A UCLA product, he started 58 games last season for Orlando before signing with the Lakers.

The well-traveled swingman had played for the Sacramento Kings from October 2004 to February 2005 before being traded, along with Chris Webber and Michael Bradley, to the Philadelphia 76ers.