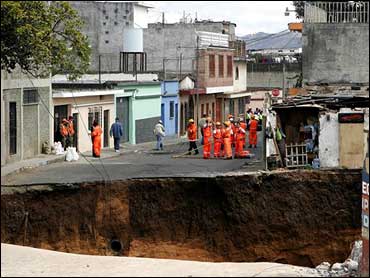 A 330-feet-deep sinkhole swallowed about a dozen homes early Friday in a crowded Guatemala City neighborhood, killing at least two teenagers and forcing the evacuation of nearly 1,000 people.

Officials said recent rains and an underground sewage flow from a ruptured main caused the sinkhole.

The pit emitted foul odors, loud noises and tremors, shaking the surrounding ground. A rush of water could be heard from its depths and authorities feared it could widen or others could open up.

Rescue operations were on hold until a firefighter, suspended from a cable, could take video and photos above the hole and officials could use the results to decide how to move forward.

Emergency spokesman Juan Carlos Bolanos identified the dead as Irma and David Soyos. Their bodies were found near the sinkhole, floating in a river of sewage. Their father, Domingo, was still missing, according to national disaster coordinator Hugo Hernandez.

Residents said others were still missing, but Hernandez couldn't confirm that.

Edward Ramirez, 26, said he and other residents had been hearing noises and feeling tremors for about a month before the sinkhole appeared before dawn, waking many in the poor neighborhood.

"People were shouting 'The electric posts are falling down!'" said Ramirez, who lives 50 yards from the hole. "We are going to a friend's house now. There's no way we'll stay here."

(CBS)
Police helped residents move out of their homes. Some officers even carried refrigerators and televisions on their shoulders, while other pushed sofas on makeshift carts.

Security officials were on guard for possible looters and to clear the area of onlookers.

Cristobal Colon, a spokesman for the municipal water authority, said the sewage main ruptured after becoming clogged. He said the city was aware of the blockage and the army had been considering a controlled explosion to clear the pipe, which carries both rainwater and sewage for much of the capital.

Antonio Fuentes, 50, said he plans to abandon the run-down neighborhood he has called home for 15 years.

"Last night a friend had to take my handicapped wife out on motorcycle," he said. "Now I'm leaving for good, never to come back."