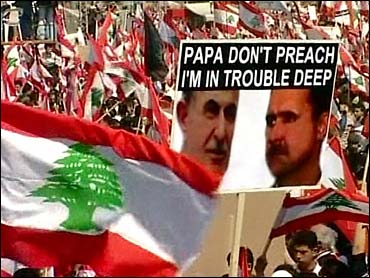 Hundreds of thousands of opposition demonstrators chanted "Freedom, sovereignty, independence" and unfurled a huge Lebanese flag in Beirut on Monday, the biggest protest yet in the opposition's duel of street rallies with supporters of the Damascus-backed government.

Crowds of men, women and children flooded Martyrs Square, spilling over into nearby streets, while more from across the country packed the roads into Beirut — responding to an opposition call to demonstrate for the removal of Syrian troops from Lebanon.

"We are coming to liberate our country. We are coming to demand the truth," said Fatma Trad, a veiled Sunni Muslim woman who traveled from the remote region of Dinniyeh in northern Lebanon to take part.

The assassination of former Prime Minister Rafik Hariri exactly one month ago sparked the series of protests against Syria, the dominant power in Lebanon.

The throngs fell silent at 12:55 p.m. — the exact time Hariri was killed four weeks ago by a huge bomb in Beirut. The silence was broken only by church bells tolling and the flutter of flags.

Monday's protest easily topped a pro-government rally of hundreds of thousands of people last week by the Shiite Muslim militant group Hezbollah. That show of strength forced the opposition to try to regain its momentum.

Most Lebanese seem to hope that the rivalry will generate healthy political debate — and lead to elections in May, but there is an underlying fear it could fracture into a new round of civil war, reports CBS News Correspondent Elizabeth Palmer.

Syria's military withdrawal continued Monday, with intelligence agents closing two offices in the northern towns of Amyoun and Deir Ammar, on the coastal road between the port of Tripoli and the Syrian border. Intelligence agents also dismantled two checkpoints in the Akkar area. About 50 intelligence agents in all departed for unknown destinations, although it was believed to be northern Syria.

Most intelligence offices, the widely resented arm through which Syria has controlled many aspects of Lebanese life, remained in northern and central Lebanon after Syrian troops moved east, closer to the Syrian border.

Last week, intelligence officers left the central towns of Aley and Bhamdoun and headed to Syrian-controlled areas of eastern Lebanon. The redeployment is the first stage of what Damascus says will be a full withdrawal, although it has not given a timetable.

The opposition is demanding a full Syrian withdrawal, the resignations of Lebanese security chiefs and an international investigation into Hariri's Feb. 14 assassination.

Many were also particularly offended by pro-Syrian President Emile Lahoud's reinstatement last week of Prime Minister Omar Karami, who was forced to resign on Feb. 28 by a giant opposition protest.

"They are challenging us, and we are here to show them that we will not accept," said banker Farid Samaha as he joined the demonstration. "We are determined to liberate our country and we will not stop."

A line of people in the square carried a 100-yard-long white-and-red Lebanese flag with the distinct green cedar tree in the middle, shaking it up and down and shouting, "Syria out."

Protesters sang the national anthem. Others chanted "Truth, freedom, national unity," or "We want only the Lebanese army in Lebanon."

"Syria out, no half measures," read a banner, borrowing from President Bush's description of Damascus' gradual withdrawal from this country of 3.5 million.

In addition to packing Martyrs Square, thousands of other protesters spilled into the nearby Riad Solh Square and outlying streets. There was no official count of Monday's crowd, but it appeared to reporters on the scene to be easily bigger than last week's pro-government, anti-U.S. rally called by Hezbollah, which was estimated by The Associated Press at 500,000 people.

It came in the wake of U.N. envoy Terje Roed-Larsen's string of meetings with Syrian President Bashar Assad and top Lebanese government and opposition officials to ensure the implementation of a U.N. Security Council resolution demanding Syria's withdrawal.

Roed-Larsen indicated he had extracted further details of a pullout timetable from Assad during their meeting Saturday and would take those details back to U.N. headquarters this week.

Syrian Cabinet minister Bouthaina Shaaban told CNN a "very fast timetable for withdrawal" was expected, with completion probable ahead of Lebanese parliamentary elections — as Bush has demanded. Election dates have not yet been set, but the current parliament's mandate expires May 31.

A senior Lebanese army officer said Sunday that 4,000 Syrian soldiers — more than a quarter of those serving in Lebanon just a week ago — have been brought back to Syria, but he said a date for a complete withdrawal won't be set until an April 7 meeting of Syrian and Lebanese officers.

It also requires a Lebanese government to be in place to negotiate with Syria on a full troop withdrawal, since Karami is leading a caretaker government and cannot negotiate foreign agreements. A final agreement on a Syrian withdrawal will have to wait for a Cabinet to be formed and approved by Parliament.

The political process is deadlocked, with the opposition refusing to join any government before their demands are met, and Karami insisting on a "national unity" government. Some opposition members accuse Karami of stalling to kill the chances of holding an election they believe the pro-Syrian camp, which has a majority in the legislature, will lose.

Karami is expected to begin consultations Tuesday on forming a Cabinet.

About 100,000 pro-Syrian demonstrators turned out Sunday in another Hezbollah-organized protest in the southern town of Nabatiyeh.

Syria has been Lebanon's main power broker for nearly three decades since sending troops to its smaller neighbor in 1976 to help quell what was then a year-old civil war. The troops, at times numbering more than 35,000, stayed after the war ended in 1990.