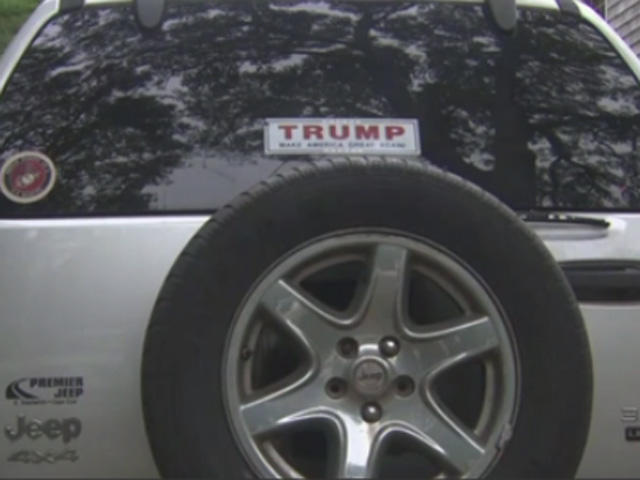 HYANNIS, Mass. -- A driver whose SUV was rammed by a car believes his vehicle was targeted because he had a President Trump bumper sticker on it, reports CBS Boston. A woman from Taunton, Mass. is facing charges.

"I could hear her screaming (at a red light) out of the car or something, so I thought, 'Man, maybe something's wrong with my car,"' said the motorist, who didn't want to be identified. "I get out, and all of a sudden I hear, 'You're racist,' and a bunch of cuss words."

Police say the other driver was 25-year-old Chloe Wright.

The motorist recorded the incident as she first allegedly drove into the back of his SUV, then clipped his door, missing him by inches. "Her tire was right next to my foot," he said. "That could have ended really bad."

The incident happened in Hyannis. He says it started earlier when she was honking and yelling at him. "The first thing she said when I came out of the car was, 'Did you vote for Trump?' And I was like, 'Yeah, what of it?' And that was pretty much what triggered this; it was like nonstop."

Wright has been charged with Assault and Battery with a Dangerous Weapon.

The Associated Press reports she pleaded not guilty in court in Barnstable, Mass. on Monday to that charge. She's also charged with vandalizing property and leaving the scene of property damage, the AP says.