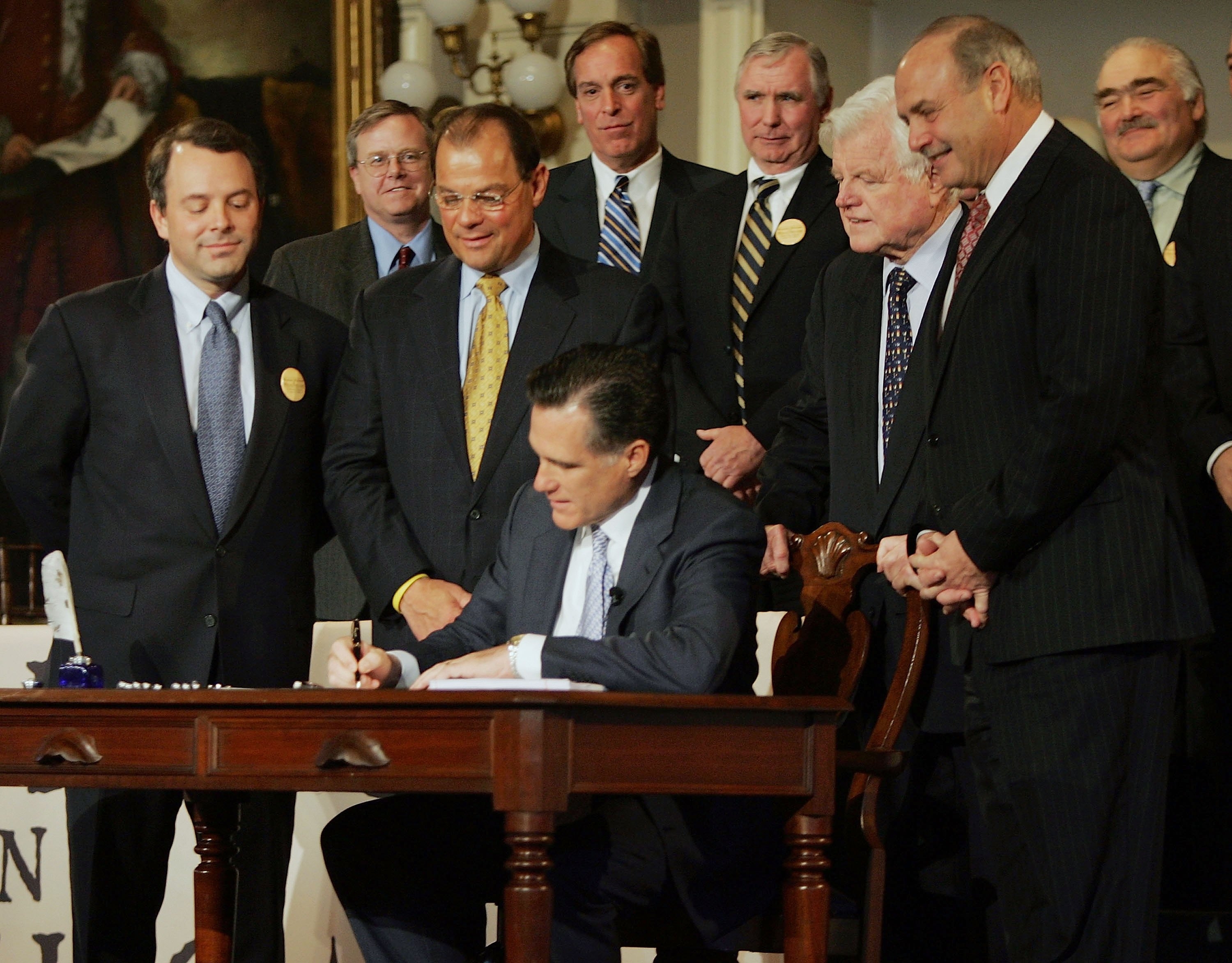 (CBS News) BOSTON - Six years ago, when Mitt Romney was still governor of Massachusetts, he called his health care reform promising health insurance to all residents of his state "a giant leap forward."

His goal, articulated at the bill signing ceremony at Faneuil Hall on April 12, 2006, was "every citizen with affordable, comprehensive health insurance."

The trigger to achieving that was imposing an individual mandate that requires every citizen of Massachusetts to obtain coverage or face fines.

As a result, the state went from 90 percent of its residents insured to 98 percent, the highest rate in the nation.

While two percent of Massachusetts residents are still not covered, that compares favorably to the national average of 16 percent uninsured.

The Obama administration cited Massachusetts as a model for the 2010 Affordable Care Act, which had an individual mandate at the heart of its Supreme Court review.

Though Romney opposes the Obama health reform, Romney defended the mandate as a personal responsibility during his first campaign for the Republican presidential nomination.

"We said, look, if people can afford to buy it, either buy the insurance or pay your own way. Don't be free riders and pass on the cost of your health care to everybody else," Romney said in a televised debate before the 2008 New Hampshire primary.

MIT economist Jonathan Gruber, who advised both Romney and Obama on their plans, says insurance companies supported the reforms in both instances, because they were guaranteed more customers, particularly young and healthy people who were among the most likely to be uninsured.

"The idea of the mandate was to bring those healthy people into the pool, thereby bringing those prices down, and making health insurance affordable for everyone," Gruber said. "If you want to tell insurers, 'You can't charge the sick more than the healthy,' you have to tell insurers, 'Don't worry, the healthy will still buy insurance.' Those two have to go hand in hand."

Gruber likes to describe Massachusetts reform as a three-legged stool. The first leg was ending discrimination in insurance premiums, fulfilled by the second leg -- the mandate. The third leg was government subsidies to make a mandate feasible.

"The key thing about the mandate is to remember no one is mandated to buy something they can't afford," Gruber said.

At left, watch part one of two part series on Massachusetts' health care program on the "CBS Evening News." Watch part two above.

Of the 439,000 previously uninsured Massachusetts residents who obtained insurance after the reform became law, 83 percent did through publicly-funded programs, such as Commonwealth Care and MassHealth. Federal Medicaid funds underwrite about half the state's cost. Residents may choose plans from eight providers.

Andrew Herlihy, 29, a school program director in Malden who works as an independent contractor for the city's public schools, did not have health insurance in his early 20's and didn't think he needed it.

"I was always that guy who could dunk and was invincible, never got hurt in my life," Herlihy said. Then he blew out his knee playing basketball. After one hospital bill and the mandate lurking, he decided to enroll in a subsidized plan that now costs him $272 a month.

"Worth its weight in gold, worth every penny, to me," Herlihy said.

A few knee mishaps later, the operation he eventually needed cost $30,000, a cost he was spared because of insurance.

After leaving her corporate job to start her own business, Flynn had lost her health insurance.

"I was totally scared. I didn't know what I was going to do," she said.

She found that her lower income made her eligible for a subsidized plan that now costs her nothing.

In Massachusetts, there is not just an individual mandate to buy insurance, there is also an employer mandate to provide it, and employers do for 79 percent of Massachusetts residents, up ten percent since health reform was implemented, bucking the downward national trend, whereby only 60 percent of employers nationwide provide health insurance.

The penalties for individuals not enrolling in a plan range from $19 a month to a maximum $105, depending on income. People earning less than $16,345 a year are exempt from the mandate. The fine is no more than $58 per month for those earning up to $32,676 per year. Above that, refusal to enroll leads to the $105 bill.

George Montilio, who runs a 65-year-old family wholesale and retail bakery business in Brockton, is among the employers opting out.

"If we had to put health insurance into our company -- that would totally make us unprofitable," Montilio said. "It's almost seven percent of my gross."

With 70 employees - 30 full-time and 40 part-time - he calculates that complying with the mandate would cost him $300,000 per year in premiums. Instead, he chooses to pay the state's annual fines per employee, which for him amount to almost $20,000 a year.

"We pay the penalty," Montilio said. "My choice."

Montilio says he would like to offer health benefits to retain good employees, but he believes raising prices to foot the insurance bill would alienate customers.

"Absolute mandate - that's just not right. We feel that, you know, we should be able to make our own decisions to run our business," he said.

Romney left the governor's office at the end of one term, only nine months after he signed health reform, so it's fallen to his successor, Democrat Deval Patrick, to implement the law for the past five years

"I was skeptical of it when I first heard about it," Patrick said. "But the basic insurance idea that you get everybody in and spread the risk widely so you keep the cost down for everybody -- very, very smart."

Yet since the reform, overall health spending has risen from as a piece of the state budget pie, from 36 percent in 2006 to 43 percent in 2011, and Massachusetts spends $9,278 per person per year on health care, more than any other state.

"We made a judgment about health being a public good, and that everybody ought to have access to affordable care," Patrick said. "What folks did was come together and decide that there were more than the usual two choices, which was between a perfect solution or no solution at all, and to try something."

Stout said: "The days of scrounging around to find medicines for someone who can't afford them or find a fancy way to get somebody to a specialist by begging and pleading -- those days are gone."

She predicts health costs will come down as the newly insured seek more preventive care. Already, more women in Massachusetts are getting pre-natal care, and more people are getting cancer screenings.

"We've seen patients come in and get screened for colorectal cancer, gets lots of people diagnosed with polyps before they became cancer," Stout said.

"You have people who before would get their diabetic care in the emergency room who instead are coming into primary care, taking care of their diabetes, not ending up hospitalized every three or every four months. I mean it's a huge difference."

Today, 90 percent of Massachusetts doctors believe quality of care has improved since the reform, which two-thirds of state residents say they support.

"Initially when we began the reform, we really did want to tackle cost and access. I think the final legislation that came out was clearly geared more to access," said Amy Lischko, a Romney health care adviser now at Tufts University.

Hospitals like Massachusetts General, in Boston, are seeing more patients, but fewer visits to emergency rooms for routine care, and unpaid ER visits are down by one third.

"There is too great a fear of coverage reform and almost vilifying the experience we've had here without really understanding how successful things have been," said Dr. Gary Gottlieb, President and CEO of Partners HealthCare, which owns Mass General and eight other hospitals.

"Right now, I think the people made out the best," Gottlieb said. "First, we have people covered. Second, we've started to see a real reduction in the rate of increase in health care costs in this market relative to the rest of the country."

With 98 percent of adults and almost 100 percent of children covered by health insurance, the state's focus is shifting more toward cost control.

"We are tackling that right now," Governor Patrick said.

For example, he has empowered the state's insurance commissioner to reject excessive insurance premium increases like the double-digit rate hikes of recent years.

Patrick said, "This has been a very private sector-focused solution. It is a workable one, as we have shown here in Massachusetts, and we ought to give it a chance."