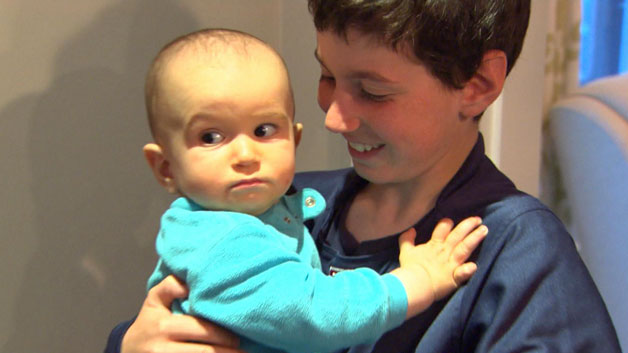 BROOKLINE, Mass. -- A Massachusetts boy is being credited with quick action that may have saved his baby brother's life, CBS Boston station WBZ reported.

Brothers Ben Doctoroff, 10, and Joshy, 8, were at home Tuesday with their babysitter and tutor when baby Zach choked on a piece of mango. Ben called 911 and handed the phone over to the tutor, who emphasized the seriousness of what was happening.

"He's not coughing at all, and he's not breathing," the tutor told the dispatcher.

Ben wasn't waiting and ran out of the house.

"I didn't have time to get my shoes on," said Ben.

He ran in his bare feet two blocks to someone he trusted - crossing guard Richard Malley.

"He comes down and says, 'my brother is choking. Can you come and help,'" said Malley.

He ran after Ben back to the house. By then first responders were already there. Zach was rushed to the hospital and underwent surgery.

Now, as the family prepares for Zach's first birthday on Friday, Ben had some ideas on the menu.

His parents credit him, in part, with saving their youngest son.

"He is a calm and cool kid and just knew what to do," their mom Cina Doctoroff said.

When asked if he's hero, Ben smiled and said, "Kind of."