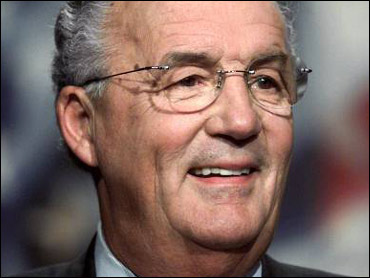 Sen. Paul S. Sarbanes, a liberal Democrat who is the longest serving senator in Maryland's history, announced Friday that he won't seek a sixth term next year.

"It was not my ambition to stay there until they carried me out," Sarbanes said during an afternoon news conference at his Baltimore office. "It was just the right time. We think we've served long and well and honorably and we're very comfortable with this decision."

Sarbanes, 72, was first elected to the Senate in 1976. He said health was not a factor but added he did consider his age in making his decision.

He is a reliable liberal vote on economic and social issues, although he has often been upstaged by Maryland's other senator, the outspoken Barbara Mikulski, who was elected in 1986.

Sarbanes is the second Democratic senator to announce he'll step down rather than run again next year, reports CBS News Correspondent Bob Fuss. The other, Mark Dayton of Minnesota, was looking at a very tough race for re-election and his departure gives Republicans hope to pick up another seat.

That's not the case with Sarbanes. While no election is predictable this far out, Fuss says Maryland is a pretty reliably Democratic state.

Among Republicans, Senate Majority Leader Bill Frist of Tennessee has long indicated he does not plan to seek a new term.

Sarbanes moved to the Senate after a career in the House that included a seat on the Judiciary Committee during the Watergate impeachment hearings involving former President Richard Nixon.

Seemingly publicity shy, Sarbanes' principal area of interest in the Senate has been the Banking Committee, where he has served as chairman or senior Democratic member for several years.

A retirement could also have repercussions in another high-profile race in Maryland next year. Republican Gov. Robert Ehrlich is expected to seek re-election, and several Democratic challengers have begun maneuvering for the nomination to oppose him.

Sarbanes said he made the announcement early to give other Democratic candidates a chance to start their campaigns. He declined to speculate on who would run for his seat, but said he expected a Democrat would win.

"We've a number of very able Democrats... I'm confident that one of them will be elected to the United States Senate in 2006 and I will do everything I can to bring around that result," he said.

Among Democrats mentioned as Sarbanes' possible replacement is former NAACP President Kweisi Mfume, who served five terms in the House before heading the civil rights organization.