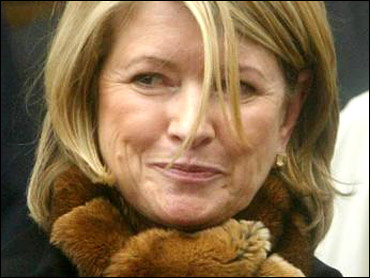 For sale: three-story Colonial situated in homey bedroom community just 12 miles from New York City. Amenities include mature fig trees planted by Martha Stewart and a holly bush she and her father pruned in the shape of a cone.

Century 21 listing agent Pat Kraven-O'Connell expects the house to sell quickly, and has designed a sales strategy to limit curiosity-seekers: No open houses and showings to pre-qualified buyers only.

"I don't want it to become a circus," she said.

Kraven-O'Connell insists the home's $549,000 asking price has no Martha Stewart factor built in.

The Kostyras bought the house when Stewart was 3, and she lived there through high school. The decorating diva hasn't lived there in years. Stewart's mother sold it to the present owners in 1987.

Stewart and ex-stockbroker Peter Bacanovic were convicted in March of lying about why she sold shares of ImClone Systems stock just before the price plunged. She's scheduled for sentencing June 17 and could face 10 months to 16 months in prison.