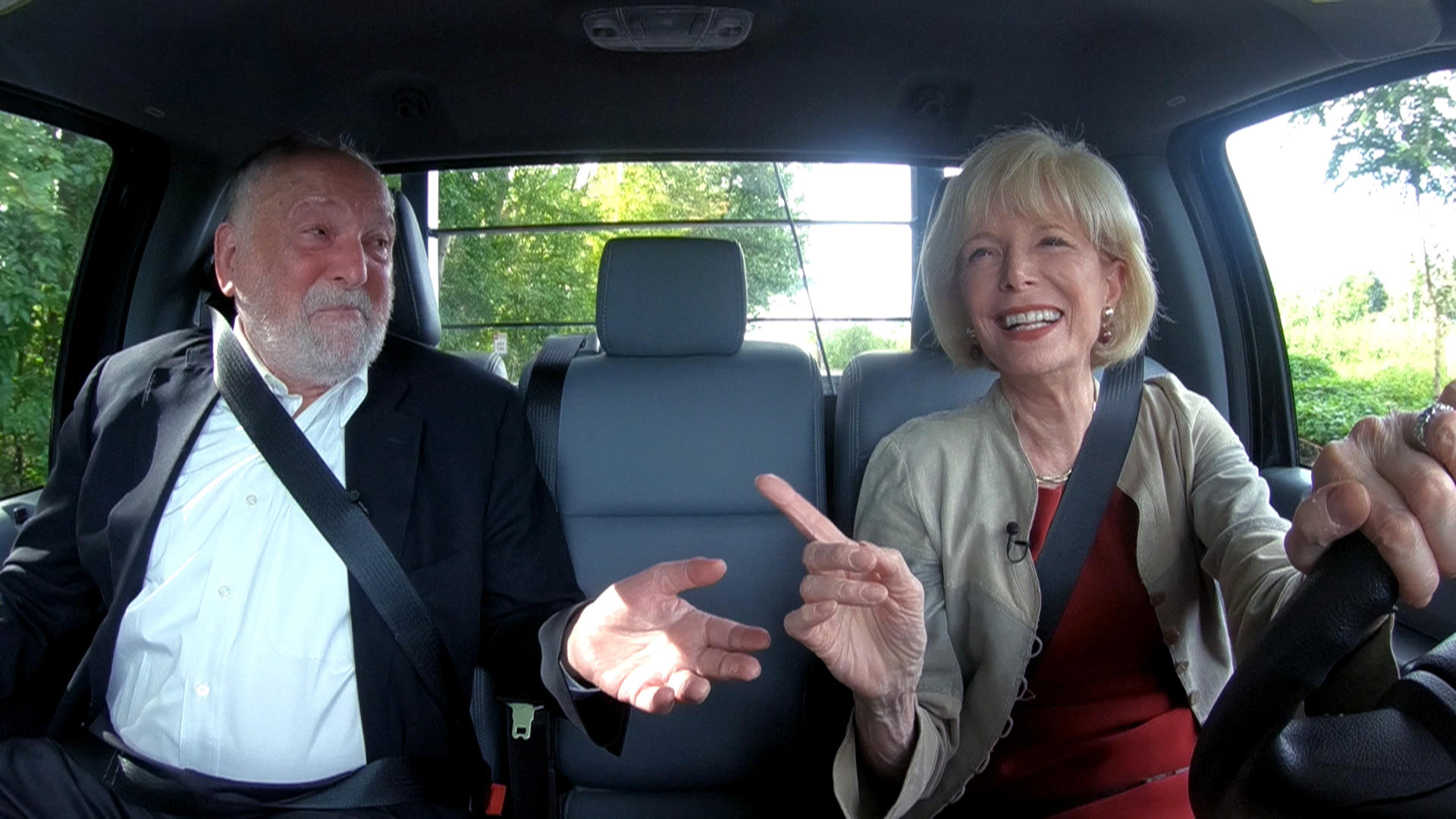 You never know who's gonna be the one with the big idea. History has shown it's not necessarily the person with the most impressive credentials.

A breakthrough can come from the least expected - perhaps like an 81-year-old eccentric from Massachusetts who toiled in isolation with no financial support for more than a decade.

His focus? A challenge that has stumped scientists for many years: how to transform inedible plant life into environmentally friendly transportation fuels in a clean and cost-effective way.

As we first told you in January, this unlikely inventor calls himself messianic, as in the messiah, and likes to say, matter-of-factly, that he is "saving the world."

Lesley Stahl: And that's what you think?

Who says things like that? Marshall Medoff does. He's a man on a mission who decided one day that he was going stop global warming.

"What I thought was, the reason people were failing is they were trying to overcome nature instead of working with it."

Marshall Medoff: When I realized what was going on here, I said, 'This is an emergency.' We gotta find new resources. We've gotta find new ways of saving the universe in terms of global warming and so forth and so on.

Lesley Stahl: What was your science education?

Lesley Stahl: So, no degree in chemistry?

Marshall Medoff: Oh, of course not. I didn't have any degree in chemistry.

Marshall Medoff: I have no idea about IQs.

Medoff has been called a genius, 25 years ago, he became obsessed with the environment and decided to abandon his business career and become an amateur scientist.

But while engineers, geologists and ecologists with Ph.D.s went to labs at MIT and Stanford, Medoff went to one of the country's most legendary settings for reflection.

Marshall Medoff: I used to run out to-- Walden, which wasn't that far away.

Marshall Medoff: What I thought was, the reason people were failing is they were trying to overcome nature instead of working with it.

He knew that there's a lot of energy in plant life. It's in the form of sugar molecules that once accessed can be converted into transportation fuel. The key word is "access." This sugar is nearly impossible to extract cheaply and cleanly since it is locked tightly inside the plant's cellulose, the main part of a plant's cellular walls. What's so tantalizing is that sugar-rich cellulose is the most abundant biological material on earth.

Marshall Medoff: Cellulose is everywhere. I mean, there's just so much cellulose in the world and nobody had managed to use any of it. Couldn't get at it.

Lesley Stahl: So that was your target.

Marshall Medoff: That was my target. So, once I decided to do that, I said, "Wow, if I can break through this, we can increase the resources of the world maybe by a third or more." Who knows?

To figure out how to break through cellulose to get at the sugars, Marshall Medoff did something that most of us wouldn't dream of: he buried himself away in seclusion for more than 15 years in a garage at a storage facility in the middle of nowhere.

Marshall Medoff: I didn't have a phone there. Nobody could disturb me. And I'd have a pile of papers that I had collected and I started reading them.

Lesley Stahl: The idea that you could solve this big problem--

Marshall Medoff: Yeah. I was-- apparently I must have had a very good mother who-- who, uh, breastfed me an extra few months or something because I had a lot of security about the fact that I'd get it done. And I never had any doubts.

Lesley Stahl: What about your private life?

Marshall Medoff: No, I-- I had to give that up.

Lesley Stahl: You gave up your private life?

Marshall Medoff: Yeah, of course.  Because I didn't see anybody from nine in the morning till nine at night or later.

Alone in the garage, Medoff started churning out ideas and patenting them. So many, he needed help.

Craig Masterman: Uh, I was shocked.

Craig Masterman: He hired me to build a lab.

Lesley Stahl: So he hired you to help improve what he was thinking in his head?

Craig Masterman: That's correct. But I implement things. He thinks a lot, I implement a lot of things.

What Masterman helped implement was Medoff's novel idea of using these large blue machines called electron accelerators to break apart nature's chokehold on the valuable sugars inside plant life - or biomass. Machines like these are typically used to strengthen materials such as wiring and cable. Medoff's invention was to use the accelerator the opposite way - to break biomass apart.

Lesley Stahl: Maybe you can tell us how the electron accelerator works.

Craig Masterman: It's pretty simple. It's basically accelerated electricity. And so what happens is is that they get accelerated--

Craig Masterman: Downward where the biomass is, and they ram into the biomass and rip it apart.

Lesley Stahl: It doesn't sound that extraordinary when you hear it except— no one else had thought about it.

Craig Masterman: I think, I think fantastic stuff is simple in hindsight.

Lesley Stahl: And none of the big scientists who were working round the clock to figure out how to get the sugars out--

Craig Masterman: No, they were all messing with things like sulfuric acid and steam explosion and crazy stuff like that, which is very expensive, all that stuff is expensive. Electron beams are inexpensive.

His inventive use of the accelerators caught the attention of investors who saw a potential goldmine in the technology. They gave Medoff's company – Xyleco - hundreds of millions of dollars, allowing him to scale up and build this factory – in Moses Lake, Washington – so he could turn his invention into reality.

Here, agricultural residue, like these corn cobs, is trucked in from nearby farms, ground up, blasted by the electron accelerator and then combined with a proprietary enzyme mix.

This process, Medoff's remarkable invention, releases plant sugars that he's now using to make products he claims will solve some of the world's most intractable problems, affecting not just the environment but also our health. One of the plant sugars is called xylose.

Craig Masterman: And it has an unusual property that your oral bacteria cannot use it. So it won't decay your teeth.

Marshall Medoff: It's healthier sugar. It doesn't do the same things to you.

Lesley Stahl: So, you could drink all the Coke. You don't have to drink Diet Coke anymore.

Lesley Stahl: And it would taste the same?

Marshall Medoff: Yeah. Of course it tastes the same. It tastes-- tastes like real sugar.

So I tried it myself. "Trust but verify."

Lesley Stahl: If I did that I wouldn't die.

Marshall Medoff: It's getting a little crowded in here Craig.

With the investor funds, Medoff also opened a $45 million testing facility in Wakefield, Massachusetts, a far cry from the garage. And he hired more than 70 scientists and engineers who have come up with a sugar-based product aimed at another impervious problem, some call it a plague, the accumulation of plastic debris.

Lesley Stahl: You have said that plastic should be outlawed.

Marshall Medoff: Yes, the plastics that are being used should be because all they're doing is accumulating. And there's an enormous amount of ocean that's being despoiled.

Lesley Stahl: But if you take a plastic bag or a plastic bottle of Diet Pepsi or whatever and throw it away, it could be there for 500 years.

Most plastics are made from petroleum. Medoff makes plastic from plants. It seemed to us that his product was hard to distinguish from regular plastic except in one key way. Chemical engineer David Jablonski says that Xyleco's bio-plastic invention can be programmed to disintegrate over specific time spans, ranging from years to as quickly as 11 weeks.

David Jablonski: You can just take this and you can find this is very degraded.

Lesley Stahl: Oh. It's falling apart. So in 11 weeks, it's-- it's already on its way to disintegrating?

David Jablonski: That is correct.

Perhaps Medoff's most consequential discovery is how to extract the plant sugars and convert them into to environmentally-friendly biofuels: ethanol, gasoline and jet fuel.

Lesley Stahl: And I'm told that you call this thing a still.

Marshall Medoff: It is a still.

Lesley Stahl: It is a still?

Marshall Medoff: It's actually making alcohol right now. Alcohol that you can drink, or you can put in your car, or you can do both.

Marshall Medoff: Here we are, on the road again.

Lesley Stahl: So Marshall, I am driving a huge truck on biomass fuel. It doesn't feel any different than normal gas to me.

Marshall Medoff: No. It wouldn't. No.

Medoff's ethanol is much better than regular corn ethanol in terms of greenhouse gas emissions - 77 percent better, according to a study that was independently reviewed.

Bob Armstrong: I was first a little bit skeptical. It seemed almost too good to be true.

Lesley Stahl: And you had never heard of him, I'm sure of that.

Bob Armstrong: I had not heard of him.

Robert Armstrong, the former head of MIT's chemical engineering department, joined Xyleco's board of directors after Medoff told him about the electron beam accelerator, his inventive way of breaking down biomass.

Bob Armstrong: The electron beam is truly a game changer.

Lesley Stahl: I was told that it's the Holy Grail, getting access to the sugars.

Bob Armstrong: People at MIT are working on it, people in the national labs  but nobody's gotten it done yet.

Lesley Stahl: Has Xyleco done it?

Bob Armstrong: Xyleco has done it.

Marshall Medoff: Yeah, he knew I did it.

Bill Perry: Well, I thought he was another Thomas Edison.

Bill Perry: Another Thomas Edison. A genius, a very eccentric genius, but a genius who had come up with this totally revolutionary idea.

Dr. Steven Chu: He definitely is a character. I come from a world of characters (LAUGHTER) in my scientific world.

Lesley Stahl: But he's not a scientist.

Dr. Steven Chu: But he has all the attributes to many successful scientists. You have to believe in yourself. You have to say, "This is going to work."

Lesley Stahl: Is there enough biomass to supply enough of this ethanol and gasoline in the world?

Dr. Steven Chu: It can make a significant dent.

A possible 30 percent dent in the petroleum market, according to a report by the Department of Energy. But the question is: can Marshall Medoff scale up his operation enough to compete with the oil industry?

Bill Perry: What is in doubt in my mind is how long it's gonna take breaking into these huge industrial markets, established markets, with established companies. That's gonna be a big undertaking.

One of those boxes is that Xyleco's fuels could be easily dropped into the pumps at existing gas stations.

Marshall Medoff: You wouldn't have to change anything.

Lesley Stahl: I can just put it right in my car--

Marshall Medoff: --with the truck.

Lesley Stahl: And-- and also go right up to the pump and get--

Lesley Stahl: It the same way?

Transportation fuels that are clean-green, plastic that disintegrates, sugar that doesn't rot your teeth. It's hard to believe, but it all flowed from the mind of the most unlikely of amateur scientists, who was inspired not by any academic laboratory, but by his owns musings at walden pond.

The clones of polo
Lesley Stahl