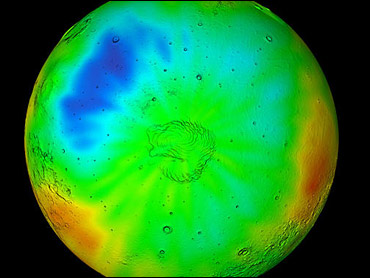 After nearly two weeks of delays, a rocket holding NASA's second Mars rover was launched into a night sky Monday on a mission to study whether the Red Planet ever had enough water to sustain life.

The rover, Opportunity, lifted off in a cloud of steam aboard a Delta II Heavy rocket at 11:18 p.m. EDT. NASA Administrator Sean O'Keefe flew to the Cape Canaveral Air Force Station to watch the launch.

The launch had been postponed more than a half-dozen times because of bad weather, a failed battery cell and a nagging problem with cork insulation failing to stick to the aluminum rocket.

Technical problems continued to plague the launch Monday night. Launch officials halted the countdown with seven seconds left during the first launch opportunity at 10:35 p.m. EDT because of a problem with a valve on the rocket.

NASA had until July 15 to launch Opportunity before Earth and Mars became too far apart. The next chance would be in four years.

The failed battery cell was discovered over the weekend and replaced. Fixing the cork on the Delta II Heavy rocket had been more challenging.

The cork is believed to have peeled off from the rocket during fueling, when minus-300-degree F liquid oxygen is loaded into the rocket. Workers replaced pieces of the cork and used a stronger adhesive.

Opportunity and its sister rover, Spirit, which was launched last month, are scheduled to arrive at Mars in January and land on opposite sides of the planet as part of the $800 million mission.

The six-wheeled vehicles will roll across the rocky red soil of Mars and send back data that could help scientists determine whether there was ever enough water on the planet to support life.

The rovers are following two other spacecraft on their way to Mars. Japan's trouble-plagued Nozomi orbiter, originally launched in 1998, is scheduled to arrive in late December or early January. Scheduled to arrive at about the same time is the European Space Agency's Mars Express orbiter and its British-built Beagle 2 lander, which also were launched last month.