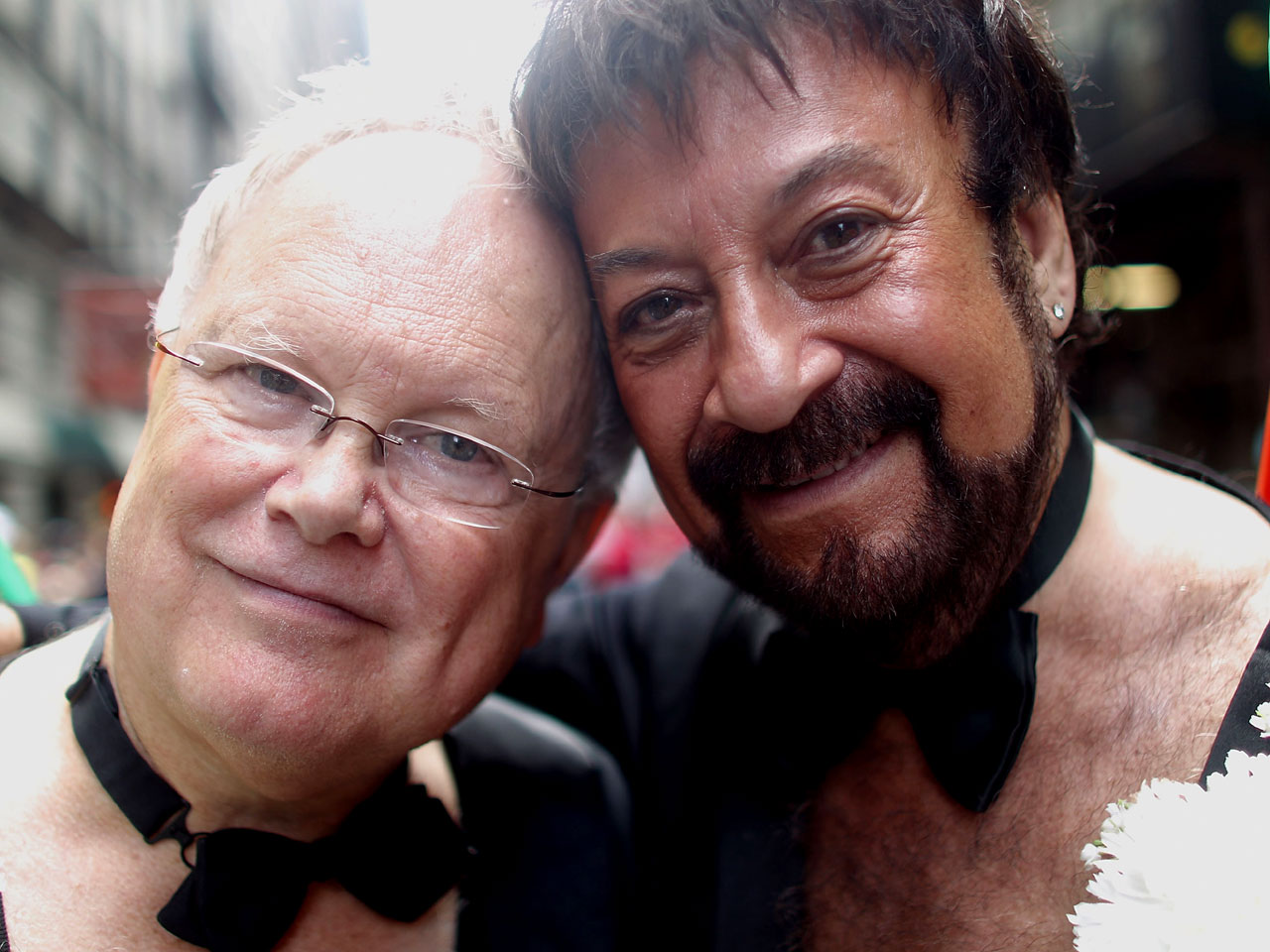 NEW YORK -- The floats were there, the music and dancing, too -- all the usual staples of one of the world's oldest and largest gay pride parades. But this year, something new joined the spectacle on the streets of New York City: proposals and wedding plans.

New York's parade turned into a carnival-like celebration of same-sex marriage Sunday as hundreds of thousands of revelers rejoiced at the state's new law giving gay couples the same marital rights as everyone else.

"We've been waiting to get married in Central Park for years, and now we got here just in time for history to be made," said Bryce Croft of Kettering, Ohio, who attended the festivities with her partner, Stephanie Croft.

The two women are not yet legally married although they share the same name, and they are in the process of moving to New York and getting married. They were in a Manhattan restaurant late Friday when they learned that the bill had passed.

"We cried over dinner, right into the mozzarella sticks," Stephanie Croft said, adding that they had already selected a spot in Central Park -- the boulder she had marked with Bryce's name two years ago. After the two get settled, Bryce planned to seek a sex-change operation to become a man.

The star of Sunday's show was undoubtedly New York Gov. Andrew Cuomo, who fought to get the bill over its final hurdle in the GOP-led state Senate. The law makes New York the sixth state to extend full marriage rights to gay couples and doubles the number of gay people nationwide who are eligible to marry.

"Thank you, Governor Cuomo" and "Promise kept" read signs lining both sides of Fifth Avenue. Throngs of cheering supporters all but mobbed Cuomo as he led off the parade just after noon.

"New York has sent a message to the nation," the governor said before the march. "It is time for marriage equality."

He called his state "a beacon," adding, "If New York can do it, it's all right for everyone else in the country to do it."

As he joined the procession, John Haracopos wore a T-shirt that declared, "Some dudes marry other dudes. Get over it." He and his partner regard the new law as a legal rubber-stamping of what they did years ago.

"We got married in the oldest church in Paris. And it was just us and God," said Haracopos, a 46-year-old hair stylist. Still, the pair plans to hold another ceremony in New York to ensure their relationship is fully recognized by the law.

His partner, Peter Marinos, a 59-year-old Broadway actor, wore a T-shirt of his own that said, "Marriage is so gay."

Police Commissioner Ray Kelly marched at the head of a group of gay NYPD officers, right behind the official police band. At the end of the parade, a female officer proposed publicly to her fiancDee, also an officer, who accepted. They quickly vanished into the crowd.

All along the parade route, freedom of expression seemed to know no bounds. In Greenwich Village, a uniformed officer stood quietly next to a woman who had unbuttoned her blouse and cheered the parade topless.

"This year's gay parade is different -- it's electric!" said Mayor Michael Bloomberg's longtime companion, Diana Taylor. "You can really feel it, it's so exciting."

"You couldn't hear yourself think, it was so loud," Quinn said. "People were crying, jumping up and down and screaming. Everyone was smiling. It was unbelievable."

The crowd, standing a dozen people deep behind police barricades, whooped and screamed for several hours.

"I'm really, really proud of New York," said Hannah Thielmann, a student at Fordham University in the Bronx who attended with her girlfriend, Christine Careaga.

The couple, both 20, were dressed as brides, with Careaga in a white veil and Thielmann wearing a black top hat and a sash that said, "Bride to Be."

Careaga said her mother called her crying tears of joy after the New York Senate voted on the measure Friday.

"Every mother wants her child to be happily married," Careaga said.

State Sen. Tom Duane, a Manhattan Democrat who is gay, said he and his partner had not decided when they would get married, "but now we get to decide, and it couldn't be better than that."

In Chicago, reports of vandalized floats did not dampen the spirits of crowds energized by Illinois' recent adoption of a law permitting civil unions for same-sex couples.

Parade organizers said vandals slashed the tires of as many as 50 of the approximately 75 floats parked at a South Side garage. The parade went ahead as planned.

Police said it was too early to determine if the damage was a hate crime, largely because there was no accompanying message or graffiti.

In New York, the parade ended near the site where gays rebelled against authorities and repressive laws outside the Stonewall Inn in Greenwich Village on June 28, 1969 -- an event that gave rise to the gay rights movement.

The following year, several hundred people marched through the neighborhood to commemorate the riots in what is commonly considered the world's first gay pride parade.

This year's grand marshals include author and sex columnist Dan Savage and his husband, Terry Miller, who married in Canada; the Rev. Pat Bumgardner, senior pastor of Metropolitan Community Church of New York and a proponent of gay rights; and the Imperial Court of New York, which raises money for gay health and social services and touted a multicolored float.

The law signed by Cuomo takes effect in 30 days. It was passed amid opposition from influential religious groups in the state.

The changes in New York added something extra to San Francisco's 41st annual pride parade, where "Love New York" signs could be seen scattered throughout the crowd.

"I think everybody here is rallying in a way of, `Hooray, New York! Now how about California?"' said 22-year-old Megan Moore of Castro Valley, who helped kick off the event with the lesbian motorcycle group Dykes on Bikes.

There was also an unusual twist at the San Francisco parade, as a dedicated group of marchers expressed their support for accused WikiLeaker Bradley Manning, currently in jail under accusations that he was responsible for turning over hundreds of thousands of classified government documents.

On the Bradley Manning Support Network website, a post states that Manning was "Dedicated to equal human rights, he stood openly against Don't Ask Don't Tell, and now he is imprisoned as the alleged Wikileaker."

Lisa Schilling, 45, of Berkeley, who attended the parade with her partner and their 4-year-old son, expressed confidence that Proposition 8, California's gay marriage ban, would ultimately be declared unconstitutional. The legal battle has reached the 9th U.S. Circuit Court of Appeals.

In the meantime, New York's actions help the gay marriage cause throughout the country by "keeping the issue at a higher profile," Schilling said.

A short time later, a group of marchers passed with a stereo blasting what for many had become a fitting anthem: Beyonce's "Single Ladies (Put a Ring On It)."