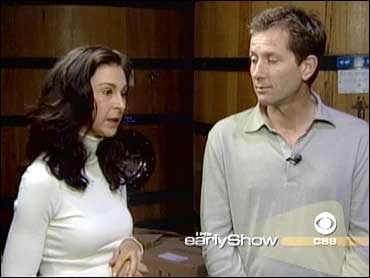 After all, working together means spending the days together. But what happens if the marriage falls apart and a couple decides to file for divorce?

On the The Early Show she

introduced a couple
from Napa Valley, Calif., that has continued to share their business after their divorce.

Elaine and Michael Honig married in 1987 and immediately put all their energy into the fledgling Honig Winery.

"We worked all the time," Elaine said. "The fun thing about that is being a couple and working together all the time, you get to see each other."

But on their 15th wedding anniversary, Elaine broke the news to Michael that she wanted a divorce.

"I found that the business was a lot of what we did," she told Kauffman. "I was wanting to have kids and slow down a bit, and we just had very different goals about that.

"Michael was just on fire. He didn't want to slow down."

Michael and Elaine have been divorced for three years. They both live on the vineyard, although in separate houses.

Their offices remain connected, separated only by a sliding glass door. And while family and friends question their decision, the Honigs say there are more good days than bad days.

Jim Ellis, a business consultant, told Kauffman it's not so unusual in a divorce for the separating spouses to want shared custody of the family business.

"It is your baby," Ellis said. "There's still the pull of profitability, building market share, growing a business, watching something grow."

spoke with
co-anchor Rene Syler and said the arrangement can make sense.

"It's becoming more and more popular to have a good divorce," Fox said. "One that's actually amicable, where the exes stay friends and work toward either continuing business or raising children together, and actually find that the hot buttons that destroy marriage are really not an issue in business."

Fox says that there are certain rules in this situation and, above all, you have to have trust.

"If you can't trust your ex, you can't stay in business together," Fox told Syler. "So if your divorce was the result of an infidelity, the trust is gone. So, really, all bets are off as far as business goes."

Even when things seem to be working, changes in either partner's life can disrupt the business arrangement. For instance, when one of the ex-spouses starts to date again.

"It's going to be uncomfortable, Fox said, but not necessarily fatal to the business," she says. "As long as you acknowledge the feelings that you have — anger, resentment, jealousy — that you deal with them, see a therapist, deal with it outside of the business."

Elaine Honig can certainly remember having doubts about the idea, particularly just after the divorce, when emotions were running high.

"I can remember just thinking, 'I'm freaking out. I'm free-falling. I am scared. I have no idea what's going to happen with my life,' " she told Kauffman. "We definitely threw caution to the wind."