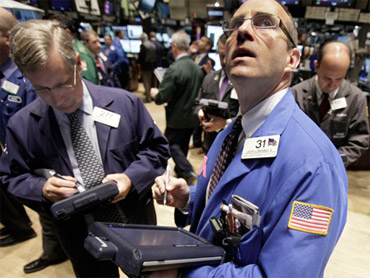 JPMorgan helped set a high bar for banks, and investors didn't like as much what they heard Thursday from rivals Goldman Sachs and Citigroup.

Advancing stocks narrowly outpaced those that fell on the New York Stock Exchange, where volume came to 1.4 billion shares, about the same as Wednesday.

Stocks zigzagged Thursday afternoon, a day after major indexes vaulted to their highest levels in a year on strong profit reports from JPMorgan Chase & Co and Intel Corp. The Dow Jones industrials wavered around the 10,000 level, having the day before for the first time since last October.

JPMorgan helped set a high bar for bank earnings, and investors didn't like as much what they heard from rivals Goldman Sachs and Citigroup. Goldman's net income of $3.19 billion beat expectations on strong trading profits, but its stock fell on disappointment over a sharp fall in investment banking revenues. Citigroup reported a slightly smaller loss per share than expected but said credit losses remain high.

Investors drew some comfort from government reports that new unemployment claims fell more than expected last week and that manufacturing activity in the New York region has improved.

"Things are going in the right direction but the fundamental economic improvement is slow," said Robert Dye, senior economist at PNC Financial Services Group. "The tendency is for the markets to get ahead of themselves and have to be rebalanced periodically."

The results from Goldman weighed on financial stocks. A jump in oil buffered some of the market's losses by lifting shares of energy companies.

The day's moves were modest, and traders weren't alarmed to see some consolidation the day after such a strong rally. Major stock indexes have rocketed off of 12-year lows in March but remain well below the highs of two years ago.

Seeing the Dow Jones industrials at five digits for the first time in a year could spook some traders who worry that stocks have been too quick to rebound. Others say that skepticism is a signal that the market will continue to defy expectations and advance.