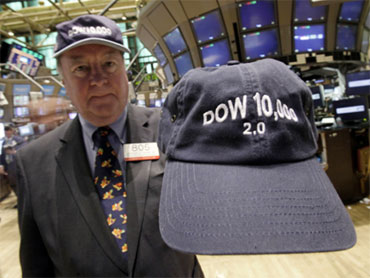 When the Dow Jones industrial average first passed 10,000, traders tossed commemorative caps and uncorked champagne. This time around, the feeling was more like relief.

The best-known barometer of the stock market entered five-figure territory again Wednesday, the most visible sign yet that investors believe the economy is clawing its way back from the worst downturn since the Depression.

The milestone caps a stunning 53 percent comeback for the Dow since early March, when stocks were at their lowest levels in more than a decade.

"It's almost like an announcement that the bear market is over," said Arthur Hogan, chief market analyst at Jefferies & Co. in Boston. "That is an eye-opener - 'Hey, you know what, things must be getting better because the Dow is over 10,000."'

Cheers went up briefly when the Dow eclipsed the milestone in the early afternoon, during a daylong rally driven by encouraging earnings reports from Intel and JPMorgan Chase. The average closed at 10,015.86, up 144.80 points.

"I think there were times when we were in the deep part of the trough there back in the springtime when it felt like we'd never get back to this level," said Bernie McSherry, senior vice president of strategic initiatives at Cuttone & Co.

Ethan Harris, head of North America economics at Bank of America Merrill Lynch, described it as a "relief rally that the world is not coming to an end."

The historic rebound has been led by the once-battered bank stocks, reports CBS News correspondent Anthony Mason. Bank of America is up almost 400 percent since March, Citigroup is up 375 percent, and American Express is up 230 percent.

When the Dow first broke 10,000 back in March of 1999, veteran trader Art Cashin broke out his rally cap. New caps were printed up for today, Mason reports.

"The downside of it is it reminds people that for ten years we've basically gone nowhere," Cashin said.

Indeed, the mood was far from the euphoria of 1999. The Internet then was driving extraordinary gains in productivity, and serious people debated whether there was such a thing as a boom without end.

"If this is a bubble," The Wall Street Journal marveled on its front page, "it sure is hard to pop."

It did pop, of course. And then came the lost decade.

The Dow peaked at 14,164 in October 2007, then lost more than half its value after the financial meltdown last fall. At its low point, the average stood at 6,547.05. The breathtaking rally since then brings stocks to roughly break-even for the past 10 years.

So where does the market go from here?

Some market watchers see 10,000 as an illusion because there are still lingering threats to an economic recovery - rising unemployment, weak consumer spending and a battered housing market.

Investors like Scott Shaffer, manager of an electronics company in Dallas, are still wary, reports Mason.

"I'm not sure that we can look at just one number, this run up to the magical 10,000 and think, 'wow, everything is fine,' because that really is not the case," he said.

The investors who have driven stocks higher since March are the pros: hedge funds and institutions whose furious selling hastened the collapse of the market in the first place.

And red flags are showing up in the technical charts that professional investors use as they make their trading decisions. The Dow sits about 18 percent above its average of the past 200 days.

"The market by all technical indicators is completely overbought, just like back in March it was completely oversold," said Rich Hughes, co-president of Portfolio Management Consultants in Los Angeles.

On the other hand, Wall Street analysts say 10,000 is more than just a number - it can have legitimate psychological implications.

A recovering stock market soothes the psyche as people watch their portfolios and 401(k) retirement accounts being replenished. And if people start spending again, that may persuade more investors, including some reluctant pros, to go back into the market.

"Psychology plays a huge role in investing, so when you're trying to overcome the huge levels of panic and fear that we've seen over the last year, psychology shouldn't be discounted," said Carl Beck, a partner at Harris Financial Group.

Many investors, especially individuals, are afraid they'll put money into the market only to watch it disappear if stocks plunge again. It's happened before: In 1975, stocks rose 53 percent in less than four months after a recession. Then they lost 11 percent before climbing again in early 1976.

If stocks follow historical patterns, they could be nearing their peak. Assuming the recession technically ended this summer, as many economists believe, the Dow's surge since March puts it near where past rebounds have started to fade.

On top of that, there are still plenty of problems that could trip up the market. Companies posted better-than-expected earnings in the second quarter, but mostly because of cost-cutting, not the sales increases needed to keep growing.

Individual investors remain cautious. In August, well into the rally, they put $11 into bond funds for every dollar they put into stock funds, according to the Investment Company Institute, the mutual fund trade group.

But they appear to slowly be coming back to stocks. Retail brokerage TD Ameritrade reported an average of 431,000 trades a day in August, up from barely more than 300,000 when the market was sliding in January and February.

If the market can hold Wednesday's milestone, investors should grow even more confident.

"It wouldn't surprise me if it made Joe Main Street more comfortable," David Kelson, portfolio manager of Talon Asset Management in Chicago.