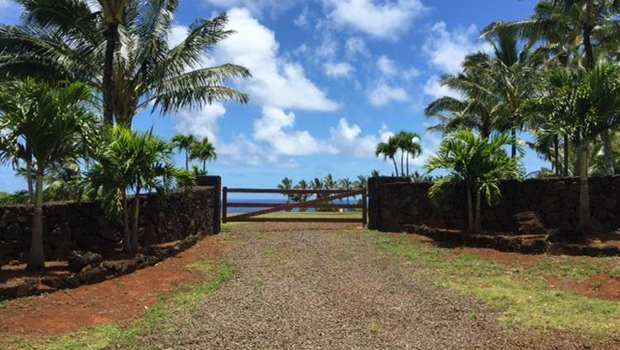 HONOLULU -- Some of Facebook CEO Mark Zuckerberg's neighbors are grumbling about a rock wall he's having built on his property on the north shore of the Hawaiian island of Kauai.

Retiree Moku Crain said Tuesday the wall looks daunting and forbidding. Crain hopes and expects Zuckerberg will soften the wall's look by planting foliage around it.

The wall began going up about four to six weeks ago. It runs along the property next to a road in the semi-rural community of Kilauea.

"Whereas before when we drove along the road we could see the ocean and see through the property, it's closing off that view," Crain said. "So I think that's part of it. Nobody likes change."

Crain estimated the wall was about 6 feet tall and that another existing wall on the property was only about 4 feet. Few would complain if the new wall was built at the same height, Crain predicted.

CBS Honolulu affiliate KGMB-TV reports that some say that Zuckerberg's wall is much smaller -- and less controversial -- than the barrier erected by previous landowner Jimmy Pflueger.

Residents sued Pflueger more than a decade ago over a 15-foot berm the retired car dealer erected on the property, the station reports. Pflueger was later ordered to tear down the structure because of the suit.

Lindsay Andrews, a spokeswoman for the billionaire's Kauai property operations, says the rock wall is designed to reduce highway and road noise. Similar walls are routinely used for this purpose, she said. The wall follows all rules and regulations, she said.

"Our entire team remains committed to ensuring that any development respects the local landscape and environment and is considerate of neighbors," she said in a statement.

Other neighbors told The Garden Island newspaper on Kauai that the wall was oppressive, blocks breezes and views and "doesn't feel neighborly."

But software engineer Brian Catlin said the fence looks nice. He said it's an improvement on the barbed wire fence that was there. He said the complaining was limited to "just a few crybabies" and "nobody else cares."

"If they wanted to protect the view, they should have bought that land," Catlin said. "He paid a lot of money for that so he can do what he wants with it."

Catlin insisted the rock wall was less than 6 feet tall because that's how tall he is and he can see over it.

Forbes reported Zuckerberg paid over $100 million for the property, which spans more than 700 acres on the coast, in 2014.

Catlin said it was a good thing Zuckerberg bought the property because a previous landowner had plans to build a housing development on part of it, which would have increased cars and traffic. The Garden Island newspaper reported in 2014 that a 357-acre section of the property called the Kahuaina plantation had been subdivided for 80 luxury homes of up to seven acres a piece.