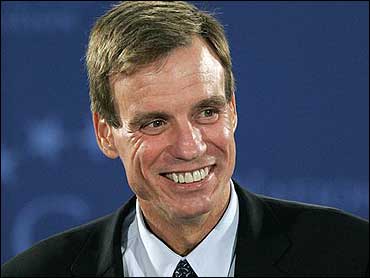 Former Gov. Mark R. Warner will announce Thursday that he is running for a U.S. Senate seat next year, sources close to Warner said Wednesday.

Warner, 52, will announce in a letter to supporters and in an online video his intention to run for the seat retiring Republican John W. Warner will vacate after five terms.

Two sources associated with Warner's planned announcement as well as Democratic sources in Washington confirmed Warner's plans on the condition of anonymity because they did not want to pre-empt the announcement.

Warner made clear that he would run either for the Senate or for governor in 2009. The telecommunications multimillionaire spent the 12 days after John Warner announced he would not seek a sixth term consulting with friends and political advisers before completing his decision.

Warner launched a brief exploratory campaign for president and his political action committee, Forward Together, raised more than $9 million before he abruptly dropped out last October, stunning longtime friends and campaign backers.

Warner is one of a small number of prominent Democrats whom party officials have been recruiting for Senate races. In New Hampshire, former Gov. Jeanne Shaheen has not yet said whether she will challenge Sen. John Sununu, while former Nebraska Sen. Bob Kerrey is considering making a comeback bid to replace a retiring Sen. Chuck Hagel.

His millions of dollars and broad popularity in the state's rural farming and coal mining areas and its monied, fast-growing Washington suburbs give Democrats a chance to expand their one-seat Senate majority next fall.

If Warner wins, it would be the first time since 1970 that both senators from Republican-leaning Virginia have been Democrats. It also could give the Democrats momentum to do something Virginia has done only once since 1952: support a Democrat for president.

Republicans reacted coolly to the anticipated announcement. "We're glad to see Mark Warner finally made a choice on which office to run for - I guess he got tired of waiting by the phone for a presidential campaign to call," said Rebecca Fisher, spokeswoman for the GOP campaign committee.

Warner served as governor from 2002 to 2006, coping with a $6.4 billion fiscal crisis, the Washington-area sniper attacks and Hurricane Isabel. Regarded as a centrist, he left office with high job-approval ratings despite a $1.4 billion tax increase. He helped elect Democrat Timothy M. Kaine, who had been lieutenant governor, as his successor, but he said in interviews he would have run for a second term if Virginia were not the only state that bars its governors from seeking re-election.

Friends who had advised and counseled Warner said he was torn between whether to run next year or try in 2009 to reprise his role as governor. Warner called the governor's office "the greatest job I ever had," but in the end, personal, political and policy factors shaped his decision.

He lives with his wife and three daughters in Alexandria, a short drive from the U.S. Capitol, and there was the stress of relocating the family to Richmond a second time.

Warner's executive background and his restless nature predispose him to a job like governor, where actions bring swift results, rather than service a slow-paced legislative body. The Senate, however, provides Warner an opportunity to pursue an issue that has been his focus for nearly two years: the link between U.S. energy needs, economic and commercial opportunity it presents and its effects on the environment.

Politically, Warner's personal fortune of more than $200 million makes him formidable because of his ability to fund his own campaign. Warner was aware, too, that if a Democrat is elected president in 2008, it gets much harder to elect a Democrat in Virginia in 2009.

Still more than a year from the Senate election, political conditions appear to favor Democrats next fall because of opposition to the Iraq war, President Bush's poor approval ratings and the fact that the GOP must defend 22 of the 34 seats on the ballot next year.

Aside from open seats in Virginia and Nebraska, Republicans face a struggle for the seat of Colorado Sen. Wayne Allard, who is retiring. Sununu and at least three other incumbents face potentially strong challenges. They include Sen. Norm Coleman in Minnesota, Gordon Smith in Oregon and Susan Collins in Maine.