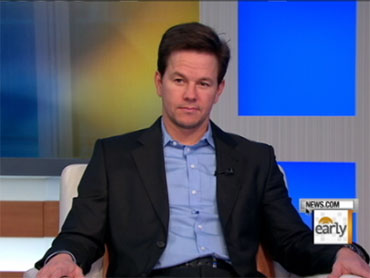 Mark Wahlberg has been making us laugh a lot this year with hit comedies like "Date Night" and "The Other Guys," but now he's getting serious.

In his new film "The Fighter" Wahlberg plays "Irish" Micky Ward, the blue collar boxer and perennial underdog from Lowell, Mass. who struggles to emerge from the shadow of his older brother Dicky, a promising boxer turned-crack head, played by Christian Bale.

"I've known these guys so long and I know them so well. If you could take Mickie and take Dickie and combine them, you would have the best fighter ever. Wahlberg told "Early Show" co-anchor Harry Smith. "Dickie had the god-given gifts and Mickie had all the heart and desire and drive and never-give-up attitude."

While it was five years ago when Wahlberg first signed on and rigorously trained for the role, it was worth it it in the end - "The Fighter" was just nominated for six Golden Globe awards, including Best Picture and Best Actor for Wahlberg.

The gloves came off for Wahlberg at the end of the interview, however, when the humble actor paid it forward and got down on his knees to praise Smith for his contribution to CBS.

"First of all, put the foot down, I got to kiss the feet because I know you're going and you're the best. Ever. Always," he said.