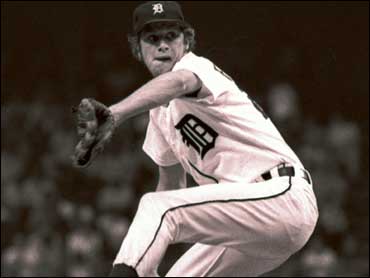 Mark "the Bird" Fidrych, the fun-loving pitcher who baffled hitters for one All-Star season and entertained fans with his antics, was found dead Monday in an apparent accident at his farm. He was 54.

Worcester County district attorney Joseph D. Early Jr. said a family friend found Fidrych about 2:30 p.m. Monday beneath a dump truck in Northborough, Mass., about 35 miles west of Boston. He appeared to have been working on the truck, Early said.

Joseph Amorello said he had stopped by the farm to chat with Fidrych when he found the body underneath the 10-wheel truck. Amorello owns A.F. Amorello & Sons, a company that does road construction, and said he sometimes hired Fidrych to haul asphalt or gravel in the truck.

"We were just, in general, getting started for the (road building) season this week and it seems as though his truck was going to be needed. It looked like he was doing some maintenance on it," Amorello said in a telephone interview. "I found him under the truck. There's not much more I can say. I dialed 911 and that's all I could do."

The district attorney's office declined to release details of the accident or the discovery of Fidrych.

The curly haired right-hander was the American League Rookie of the Year in 1976 when he went 19-9 with a 2.34 ERA and 24 complete games. But injuries cut short his career, and he ended up spending only five seasons in the major leagues, all with the Detroit Tigers. He was 29-19 with a 3.10 ERA.

"The entire Detroit Tigers organization was saddened to learn of the passing of former player Mark Fidrych today," the Tigers said in a statement. "Mark was beloved by Tigers fans and he was a special person with a unique personality. The Tigers send our heartfelt condolences to his family and friends."

Fidrych attempted a comeback in 1982 and 1983 in the Boston Red Sox organization. He pitched for their Triple A team in Pawtucket, R.I. But he never pitched in the majors after 1980 and retired in July 1983.

He acquired the nickname "the Bird" because of his resemblance to the Big Bird character on the Sesame Street television show. During games, he would bend down and groom the mound with his hands, talk to the baseball and slap five with teammates in the middle of the diamond.

"People that didn't know him might say he was weird," Amorello said, "but people who knew him didn't. He was just a big-hearted person. He never even slightly suggested any regrets of his injuries. He was just happy to have the time he had in sports. He considered himself a lucky man.

"He bought his farm. He married the woman he was in love with and had a beautiful daughter."

Fidrych married his wife, Ann, in 1986 and they had a daughter, Jessica.

Knee and shoulder injuries limited him to 58 major league games.

"Baseball will miss him. They missed him because he didn't have as long as a career as everybody would have liked in the first place. It's just horrible," former Orioles pitcher and Hall of Famer Jim Palmer said. "He did embrace life. I remember him trying to play golf when he couldn't play golf and enjoying every minute of it.

"He was a marvelous pitcher and I just hate to see him go."

Fidrych's first major league start was a complete game, two-hitter in which he beat the Cleveland Indians 2-1. He won seven of his first eight decisions and was the AL starter in the All-Star game. He allowed two runs in the first inning and put runners at second and third in the second, but he got the final two outs and left after two innings trailing 2-0. The NL won 7-1.

He tore knee cartilage during spring training the following year and was placed on the disabled list until May 24. He sustained a shoulder injury in July 1977. Fidrych pitched 250 1-3 innings in 1976 but only 162 after that when he was just 10-10.

Chicago Cubs bench coach Alan Trammell was a rookie shortstop with Detroit in 1977 and saw Fidrych's on-field behavior up close.

"He was very genuine. It was not an act," Trammell said. "He never changed. He liked to have a good time. You'd go over his house and he'd make dinner. That's the type of guy he was.

"My first spring training was 1977. I was an invitee. I remember playing the Red Sox in Winter Haven (Fla.). The three innings he pitched he broke five bats."

"When he got to us in late June every place he pitched in the league was a sellout. Six years after his great year he was still selling out minor league parks," said Pawtucket team president Mike Tamburro, who was general manager when Fidrych played there.

"His baseball career certainly ended far too soon, and now I'm sorry to say we've lost him far too soon. He was a remarkable character. He was like a meteor in the baseball world that one year. He played center stage and the entire game of baseball kind of played around him."

One of Fidrych's most memorable minor league games was against Dave Righetti, the AL Rookie of the Year with the New York Yankees in 1981 who was sent to Triple-A Columbus the following season. Fidrych pitched a complete game, 7-5 win.

"He was almost too down to earth," Tamburro said. "He was just a wonderful guy to be around. I think the antics on the field were never an act. I think it was his true feelings. He was just a simple guy, lived a simple lifestyle and just brought that lunchpail mentality to the pitcher's mound every four or five days."

"I don't think you'll ever see someone like that come around again," Lansford said. "He was just great for the game. That's what the game needed, more guys like him - colorful. He was one of a kind. That's for sure. That year, when you thought about baseball, that's the first name that came to mind. He was a guy at the top of his game. He was the man. That's shocking. It's a shame."