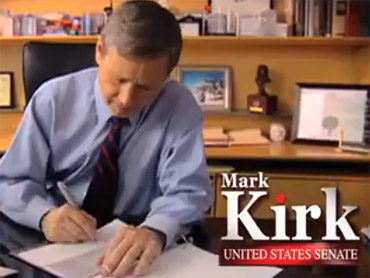 After a week when Mark Kirk was forced to come out and defend statements he's made in the past about his own record, the Illinois Republican Senate hopeful is now on the OFFENSIVE against his Democratic opponent, Alexi Giannoulias.

"Alexi Giannoulias is only 34 years old, but what a 34 years it's been," says the announcer in the new Mark Kirk television ad. "At his father's bank, Alexi made tens of millions in risky loans to convicted mobsters - Then the bank collapsed."

Referring to Giannoulias throughout the ad plays along the Kirk's campaign theme of seeking to diminish his opponent's stature and competence as a 34-year old. The fact that the Giannoulias family's Broadway Bank was seized by the FDIC had been and will continue to be an issue that puts the Democrat on the defensive.

The ad concludes with the announcer saying: "Alexi supports higher taxes to fund billions more in spending - Alexi Giannoulias - Trust him with your money?"