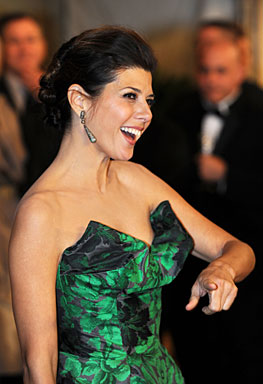 (CBS) Marisa Tomei's roles have ranged from Mona Lisa Vito, the smart-mouth from "My Cousin Vinny," to Cassidy, the lonesome stripper in "The Wrestler." Now Tomei has another role waiting for her: Lady Gaga.

Don't get too excited. Nothing is set in stone just yet.

The controversial 24-year-old singer was on Sirius XM's Morning Mashup when she said, "I would have Marisa Tomei play me. I am such a Marisa Tomei fan. All my friends call me Marisa when I get angry, because my New York accent just flies out of my body and I start smacking my gum."

Tomei, 46, was recently on "The View" where she responded to Gaga's request. "I was thrilled when I heard. I love her. I love her music. And she's a smart businesswoman," said Tomei. "So I was so touched, really. I think it's incredible that she likes my work and that she'd think of me in that way. I thought it was great."

Tomei won the Academy Award for Best Supporting Actress in 1993 for her role in "My Cousin Vinny" and is currently starring alongside Matthew McConaughey and Ryan Phillippe in the crime drama "The Lincoln Lawyer."

"Born This Way," Gaga's newest single, has reached the top of the charts across the world and her sophomore album is set to be released on May 23.