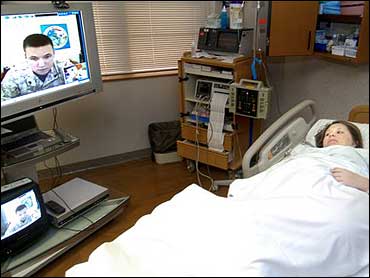 Marine Cpl. Terrence Lambert will have to wait until his return to Alabama in the fall to hold his first child, but a satellite linkup in Iraq allowed him to witness her birth on Father's Day.

Lambert, 21, watched from a room at Alisade Air Base, near the Syrian border in Iraq, while his wife, Jodilynn, gave birth early Sunday at Jacksonville Medical Center.

Twenty-year-old Jodilynn Lambert could see her husband on a 50-inch television screen as they talked and waited until their daughter, Katherine Annalee Lambert, arrived.

"It usually takes two months for us to get a letter. So this is a big improvement," he said.

It took a month to organize the videoconference. The satellite link was set up by Freedom Calls Foundation, a nonprofit organization that keeps soldiers overseas in touch with home.

Foundation spokesman John Harlow estimated the cost at $2,000 an hour, with the connection beamed from Jacksonville, to Atlanta, to Germany, and finally into Iraq's war zone.

Harlow said the foundation has organized connections for such events as graduations and even parent-teacher conferences. But this was the first live birth.

"There's been a lot of people involved that have made this possible," Jodilynn Lambert said. "This is the best Father's Day present he can ask for."