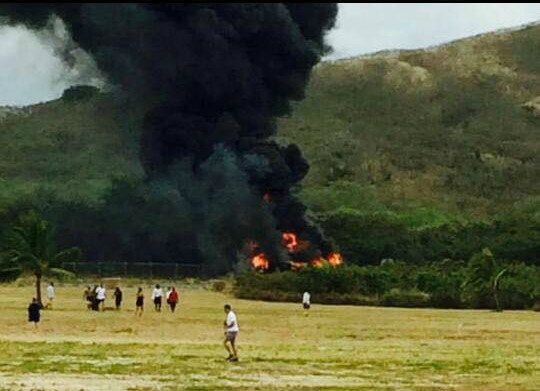 HONOLULU -- One U.S. Marine was killed and nearly two dozen others were hurt when a military aircraft crashed in Hawaii on Sunday, officials said.

A tilt-rotor MV-22 Osprey carrying 22 Marines had what was described as a "hard-landing mishap" at Bellows Air Force Station on Oahu at approximately 11:40 a.m., according to a statement released Sunday night by the 15th Marine Expeditionary Unit.

Within seconds, black smoke could be seen as only two of the aircraft lifted off again, as shown in video obtained by the station.

The 21 Marines who survived were taken to local hospitals "for assessment and treatment," the statement said. Officials did not provide details about their conditions.

"It's tragic and our condolences go out to the families and the loved ones of the victim," Marine Corps spokesman Capt. Alex Lim told the station. "But right now we need to investigate further and see what happened."

Lim, who called the MV-22 "a very reliable aircraft," said it was unclear what caused the aircraft to go down.

Kimberly Hynd was hiking the popular Lanikai Pillbox Trail and watched the exercise from her vantage point in the hills above the air base. Hynd, who estimated she was two to three miles away, told the Associated Press she noticed the three aircraft kicking up dirt and then saw smoke and fire.

"At the time I was just concerned everyone was okay. Now I know people were injured and I hope they're going to be all right," Hynd said, adding that she did not hear a crash.

Donald Gahit said he saw smoke rising in the air when he looked outside his house after hearing sirens pass by.

"At first I thought it was clouds, but it was moving fast and it was pretty dark," the Waimanalo resident told the AP.

Based at Camp Pendleton in Southern California, the unit is conducting training exercises at Bellows for about a week as part of a seven-month deployment, the Marine Corps said.

The MV-22 Osprey can take off and land like a helicopter but has wings to fly like an airplane, and may be equipped with radar, lasers and a missile defense system. Each can carry 24 Marines into combat.

Built by Boeing Co. and Bell, a unit of Textron Inc., the Osprey program was nearly scrapped after a history of mechanical failures and two test crashes that killed 23 Marines in 2000.

The aircraft have since been deployed to Iraq and Afghanistan. Some Osprey are also helping with earthquake relief efforts in Nepal.