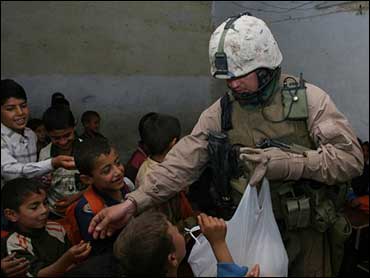 A Marine and one-time recruiter who appeared in Michael Moore's documentary film "Fahrenheit 9/11" has died in a roadside bombing in Iraq.

Plouhar was due to come home in just 38 days, reports CBS News correspondent Lee Cowan. He would have come home a decorated veteran: He was awarded the Purple Heart after an attack on his Humvee earlier this year. But his family told Cowan that he turned it down – because he didn't think he'd been injured badly enough to warrant a medal.

Plouhar, who was stationed at Camp Pendleton, Calif., had taken four years off from active duty to serve as a recruiter in Flint, Mich., after donating one of his kidneys to his uncle. He is seen in the 2004 film approaching prospective recruits in a mall parking lot.

"It's better to get them when they're in ones and twos and work on them that way," he says in the film.

Moore – who narrates the film – said Plouhar selected the mall because it was in a poor neighborhood, where finding recruits was easy, reports Cowan.

Although Plouhar willingly appeared in the movie, which is critical of the Bush administration's actions after Sept. 11, his father said Plouhar didn't realize it would criticize the war.

"I'm proud that my son wanted to protect the freedom of this country, whether we all agree with the war or not," he said.

Plouhar grew up in Lake Orion, Mich., about 30 miles north of Detroit.

He is survived by a wife and two children, ages 5 and 9. They live in Arizona.