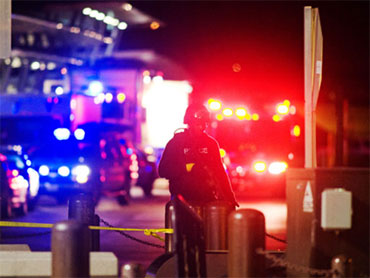 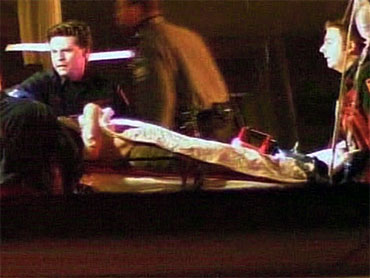 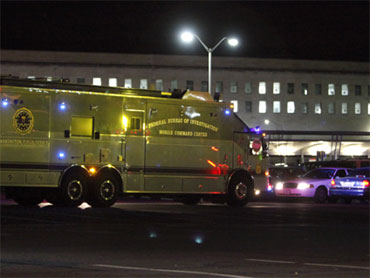 Several Internet postings under the username "JPatrickBedell" seemed to indicate that Bendell was "determined to see that justice is served" in the death of Marine Col. James Sabow, who was found dead in the backyard of his own California home in 1991. The death was ruled a suicide, but the case has long been the source of theories of a cover up. Sabow's family has maintained that he was murdered because he was about to expose covert military operations in Central America involving drug smuggling.

Bedell, 36, of Hollister, Calif., was named by Pentagon police as the gunman in the Thursday evening attack, in which he reportedly drove cross-country and arrived at the military headquarters' subway entrance armed with two semiautomatic weapons. The shootout lasted less than a minute, until he was shot and killed by return fire.

The Wikipedia user named JPatrickBedell wrote the Sabow case was "a step toward establishing the truth of events such as the September 11 demolitions."

That same posting railed against the government's enforcement of marijuana laws and included links to the author's 2006 court case in Orange County, Calif., involving allegations of cultivating marijuana and resisting a police officer. Court records available online show the date of birth on the case mentioned by the user JPatrickBedell matches that of the John Patrick Bedell suspected in the shooting.

Police said he'd had previous run-ins with the law, but found no immediate connection to terrorism. The attack, that superficially wounded two police officers, appears to be a case of "a single individual who had issues," Richard Keevill, chief of Pentagon police, said in an early morning press conference Friday.

Keevill described Bedell as "very well-educated" and well-dressed, saying Bedell was wearing a suit when he showed up at the secure Pentagon entrance about 6:40 p.m. and blended in with workers. He was concealing two 9 millimeter semiautomatic weapons and "many magazines" of ammunition.

When Bedell seemed to reach into his pocket for worker identification, he instead pulled out a gun, Keevill said. He died Thursday night from head wounds received when the two injured officers and another officer returned fire, Keevill said.

The two officers injured have been released from the hospital. One suffered a thigh wound and the other was hit in the shoulder. Keevill said both were superficial injuries.