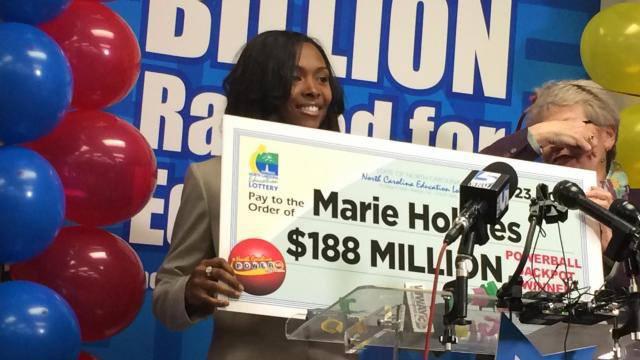 BRUNSWICK COUNTY, N.C. - A woman who in February won $188 million in the Powerball lottery may have spent $9 million of that money bailing out her fiance.

The New York Daily News reports that Lamar "Hot Sauce" McDow, who is engaged to lottery winner Marie Holmes, has been released on bond from prison twice this year -- for $3 million and $6 million.

McDow was arrested in November 2014 on charges that he trafficked and intended to sell heroin. He has prior convictions in other drug cases, as well as assault on a female.

Holmes, 26, reportedly took in nearly $88 million by choosing a lump sum payout from her February lottery win. The single mom said at the time that one of her sons has cerebral palsy and she was forced to quit her jobs at Walmart and McDonald's in order to take car of him and her other children.

Soon after she won the money, Holmes secured McDow's release for $3 million, but he was arrested in July for allegedly violating the curfew rules connected with his release. Police who went to Holmes' home to arrest McDow for that violation also charged him for illegally owning a gun.

Holmes and others there were charged with drug possession, reports CBS affiliate WILM. That case has not yet been resolved.

On August 5, McDow posted the $6 million needed to be released again.