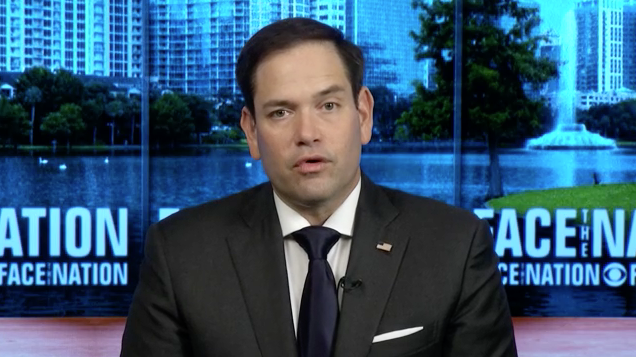 Sen. Marco Rubio needs more information about President Trump's picks for attorney general and U.N. ambassador before deciding whether to support their nominations, he said on "Face the Nation" Sunday.

Mr. Trump announced last week he will nominate William Barr to become attorney general, a position he held during the first Bush administration. State Department spokeswoman Heather Nauert is Mr. Trump's choice to represent the U.S. at the U.N. Both nominees require Senate confirmation. Barr has made some comments critical of special counsel Robert Mueller's investigation, and Nauert was a Fox News host with no government experience when she joined the State Department.

Rubio said he wants to meet with both nominees and review their qualifications before saying whether he will vote to confirm them.

"Well, I can't comment on whether I support [Barr] or not yet. I haven't even begun to review his qualifications or his record in the past," Rubio said Sunday. "I know he's been through the Senate process before. I'm going to watch the Judiciary process very closely. At the appropriate time I'll meet with the nominee and get my own take on it, and then I'll have a decision to make. I generally do not support nominees, for the most part, unless I know them personally and well, until they have worked their way through the committee process. So I can't tell you whether I support him or not until I've been able to review all of that."

Rubio is a member of the Senate Foreign Relations Committee, which will hold Nauert's confirmation hearings. He was similarly cautious about her nomination, but said she has demonstrated the ability to promote America's interest on the international stage.

"You know, I think she's been at the State Department now for almost two years, she's traveled extensively. I most certainly think she has the ability to do the job well, which is to be America's advocate in this international forum," Rubio said. "Again, she will go through with Foreign Relations Committee, we'll have a chance to interact with her, ask her questions privately and publicly and then make that judgment."

Rubio added that he needs to meet with Nauert before reaching a judgment.

"I need to meet with her," he said. "She needs to go through our committee and answer questions and then I'll be able to make a judgment on it."

Rubio said he respects Kelly, but doesn't think his departure will impede the Senate's ability to work with the White House.

"I don't think [Kelly's departure] will impact negatively in any way our ability to work with the White House or to get things done," Rubio said. "I have a lot admiration for General Kelly."