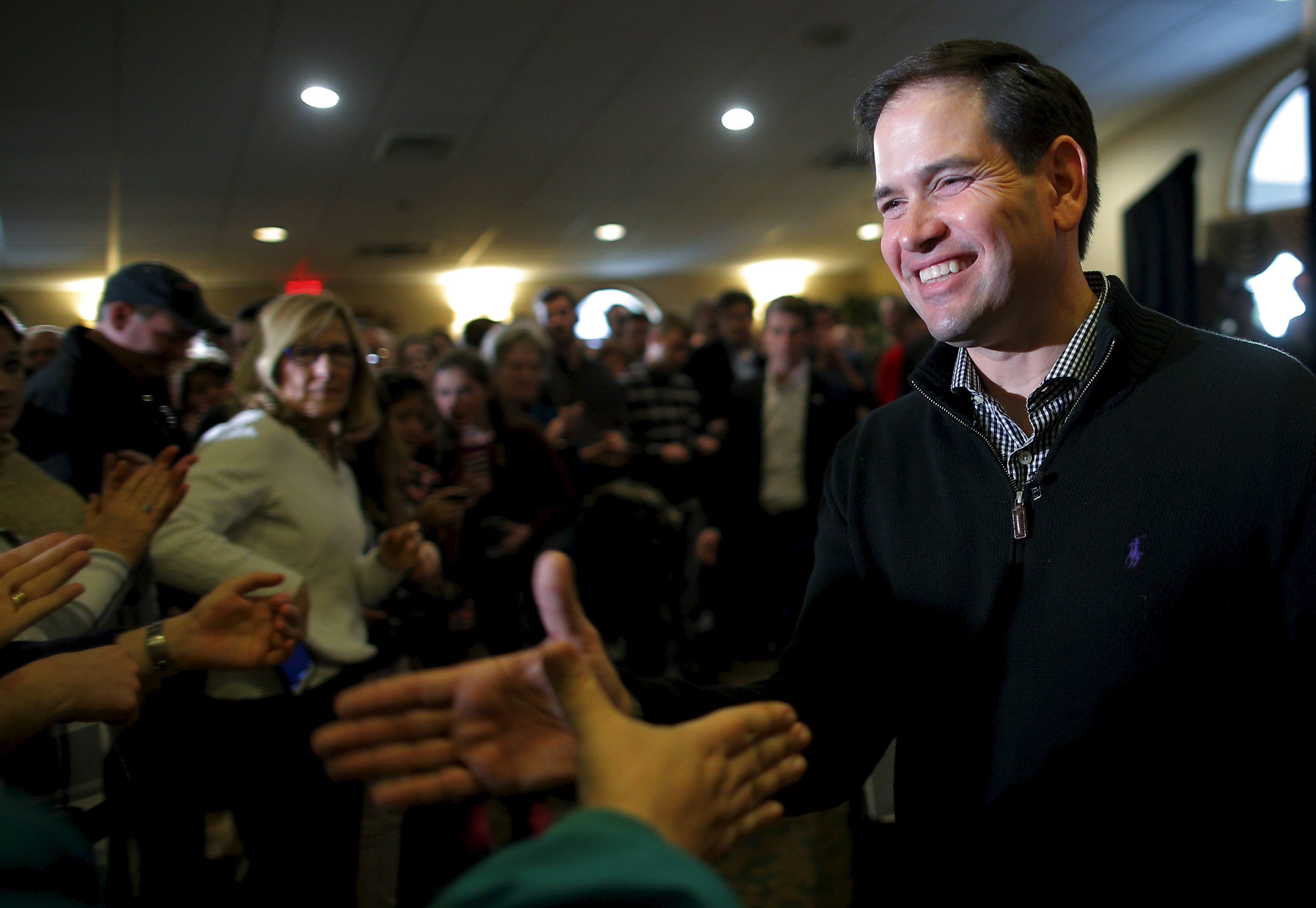 Sleep is optional when you are running for president.

Sen. Marco Rubio of Florida took off immediately after Tuesday night's debate in Las Vegas on a red eye to Iowa, landing at 2:30 a.m. in order to hold a rally outside of Des Moines Wednesday morning. By Wednesday afternoon, he was in Manchester, New Hampshire. By hitting the first two nominating states in one day, the campaign was aiming to keep up the momentum of another well-received debate performance.

After several contentious moments on stage Tuesday night between Rubio and Sen. Ted Cruz of Texas, Rubio continued the discussion on the campaign trail in Iowa, focusing on his vision for national defense and defeating ISIS. He only briefly mentioned the debate is his remarks and did not call out any of the other GOP candidates by name.

"Everyone on that stage talks tough, it's easy," Rubio declared, adding that the U.S. needs to invest more in national defense capabilities to defeat ISIS.

The freshman senator from Florida projected confidence that with his leadership the U.S. could beat ISIS. He framed the conflict with the terrorist group around American exceptionalism and the need for a sense of urgency.

"Look, we can defeat ISIS. You're telling me this 'ragtag' group of animals is something the most powerful country in the world cannot confront and defeat?" Rubio asked rhetorically, "Of course we can, but we have to have a purpose in doing it, and we have to do it now."

In an interview with Fox News right before the event, Rubio was more direct in his criticism of Cruz than when he was during the rally in front of voters.

Rubio explained that, "last night exposed those differences" between himself and Cruz on national defense and intelligence, which he only alluded to during the event in Iowa where Cruz is currently and consistently polling ahead of him.

On Fox, Rubio went bluntly after Cruz and his support for the USA Freedom Act which limited the surveillance capabilities of the NSA to track terrorists using metadata. "He aligned himself with Barack Obama, Chuck Schumer, and the ACLU and every liberal group in America that got rid of this program," Rubio declared.

On national defense, Rubio argued the "tough talk" from Cruz on ISIS is just that -- talk. He highlighted the containment budgets that Cruz has supported, which have reduced military funding.

"When you support a budget like he does that dramatically cuts defense spending, when you vote against every defense authorization bill ever presented before you, how can you argue that the bill that pays for the military, that funds our troops and the Iron Dome, how can you then stand there and say, 'I'm going to utterly destroy ISIS, but I'm not going to pay for or support what it will take to utterly destroy ISIS'?" Rubio argued.

Beyond his confrontations with Cruz, Rubio impressed Iowa voters with his debate performance. Jim Freese from West Des Moines took off work to attend the rally and highlighted Rubio's demeanor in Las Vegas.

A Rubio supporter, Freese added that electability was the biggest issue for him and that the debate Tuesday night helped Rubio's case. "I think he showed he can beat Hillary," Freese said.