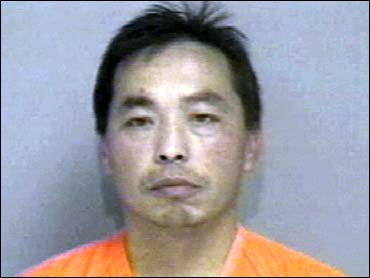 Relatives of a man being held in the deadly shooting of six deer hunters say they are just as stunned and bewildered by the incident as authorities investigating the case.

Thick glass prevented Chai Vang from any contact with family members during a brief visit Monday at Sawyer County Jail. They spoke via telephone, mixing English with the native language of Hmong immigrants from Laos.

"I still don't believe it," the suspect's brother, Sang Vang, said. "He is one of the nicest persons. ... Maybe something provoked him or something. He is a reasonable person."

Charges had not been filed against 36-year-old Chai Vang, of St. Paul, Minn., as of Monday night.

Meier told reporters a dispute over Vang's use of a tree stand on private property preceded the gunfire. Killed were Robert Crotteau, 42; his son Joey, 20; Al Laski, 43; Mark Roidt, 28; and Jessica Willers, 27.

Officials said the victims were part of a group of 14 or 15 who made their opening-weekend trip to Robert Crotteau's 400-acre property an annual tradition.

"This was his first time out with that group. He was delighted to be invited," said Karen Roidt, whose son was killed.

Some Hmong leaders questioned whether racial differences may have figured in the shootings; authorities have not determined a motive.

Sang Vang said his family was devastated, and that his brother has lived in the United States for more than 20 years and is a U.S. Army veteran.

Vang's mother, who does not speak English, declined comment through an interpreter Monday night.

"This is an incredible tragedy, one in which a great family tradition like a deer hunt has turned into such a great loss," Gov. Jim Doyle said. There have been previous clashes between Southeast Asian and white hunters in the region.

In Minnesota, a fistfight once broke out after Hmong hunters crossed onto private land, said Ilean Her, director of the St. Paul-based Council on Asian Pacific Minnesotans.

Vang's arrest left some Hmong citizens in his hometown fearful of a backlash. About 24,000 Hmong live in St. Paul, the highest concentration of any U.S. city. And the shooting has already provoked racial tension in an area of Wisconsin where deer hunting is steeped in tradition.

Locals in the Birchwood area, about 120 miles northeast of the Twin Cities, have complained that the Hmong, refugees from Laos, do not understand the concept of private property and hunt wherever they see fit.

Michael Yang, a Hmong activist, said various Hmong groups held an emergency meeting Monday to talk about how to respond. Those at the meeting heard stories from some Hmong hunters about friction with white hunters.

But, Minnesota state Sen. Mee Moua rejected the idea that cultural differences played any role in the shooting.

"We're all just speculating that may have been a trigger for him," said Moua, who is Hmong. "We're all searching for answers."

Moua added that Hmong-Americans feel racism on a daily basis, but "that doesn't mean you kill people."

Authorities said Vang has no criminal record with the Minnesota Bureau of Criminal Apprehension. Police in St. Paul said there were two domestic violence calls to his home in the past year, but both were resolved without incident.