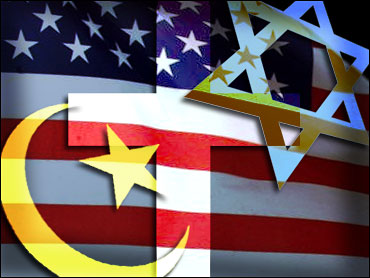 The U.S. religious marketplace is extremely volatile, with nearly half of American adults leaving the faith tradition of their upbringing to either switch allegiances or abandon religious affiliation altogether, a new survey finds.

The study released Monday by the Pew Forum on Religion and Public Life is unusual for its sheer scope, relying on interviews with more than 35,000 adults to document a diverse and dynamic U.S. religious population.

The unprecedented survey of religion answers many concerns about a secular, morally void America. To the surprise of many experts, Americans are still deeply religious, with 84 percent of adults claiming a religious affiliation, CBS News correspondent Wyatt Andrews reports.

"In the developed world, this is really the most religious country," said Fr. Thomas Williams, CBS News faith & religion analyst.

While much of the study confirms earlier findings - mainline Protestant churches are in decline, non-denominational churches are gaining and the ranks of the unaffiliated are growing - it also provides a deeper look behind those trends, and of smaller religious groups.

"The American religious economy is like a marketplace - very dynamic, very competitive," said Luis Lugo, director of the Pew Forum. "Everyone is losing, everyone is gaining. There are net winners and losers, but no one can stand still. Those groups that are losing significant numbers have to recoup them to stay vibrant."

The U.S. Religious Landscape Survey estimates the United States is 78 percent Christian and about to lose its status as a majority Protestant nation, at 51 percent and slipping.

More than one-quarter of American adults have left the faith of their childhood for another religion or no religion at all, the survey found. Factoring in moves from one stream or denomination of Protestantism to another, the number rises to 44 percent.

One in four adults ages 18 to 29 claim no affiliation with a religious institution.

"In the past, certain religions had a real holding power, where people from one generation to the next would stay," said Penn State University sociologist Roger Finke, who consulted in the survey planning. "Right now, there is a dropping confidence in organized religion, especially in the traditional religious forms."

Lugo said the 44 percent figure is "a very conservative estimate," and more research is planned to determine the causes.

"It does seem in keeping with the high tolerance among Americans for change," Lugo said. "People move a lot, people change jobs a lot. It's a very fluid society."

The religious demographic benefiting the most from this religious churn is those who claim no religious affiliation. People moving into that category outnumber those moving out of it by a three-to-one margin.

The majority of the unaffiliated - 12 percent of the overall population - describe their religion as "nothing in particular," and about half of those say faith is at least somewhat important to them. Atheists or agnostics account for 4 percent of the total population.

The Roman Catholic Church has lost more members than any faith tradition because of affiliation swapping, the survey found. While nearly one in three Americans were raised Catholic, fewer than one in four say they're Catholic today. That means roughly 10 percent of all Americans are ex-Catholics.

The share of the population that identifies as Catholic, however, has remained fairly stable in recent decades thanks to an influx of immigrant Catholics, mostly from Latin America. Nearly half of all Catholics under 30 are Hispanic, the survey found.

On the Protestant side, changes in affiliation are swelling the ranks of nondenominational churches, while Baptist and Methodist traditions are showing net losses.

Many Americans have vague denominational ties at best. People who call themselves "just a Protestant," in fact, account for nearly 10 percent of all Protestants.

White evangelicals comprise about 22 percent of the population (pdf) - 57 percent are female, and 57 percent are over age 45, a CBS News poll last October showed. Fifty percent live in the South and 24 percent in the Midwest.

Hindus claimed the highest retention of childhood members, at 84 percent. The group with the worst retention is one of the fastest growing - Jehovah's Witnesses. Only 37 percent of those raised in the sect known for door-to-door proselytizing said they remain members.

Among other findings involving smaller religious groups, more than half of American Buddhists surveyed were white, and most Buddhists were converts.

The self-identified Buddhists - 0.7 percent of those surveyed - illustrate a core challenge to estimating religious affiliation: What does affiliation mean?

It's unclear whether people who called themselves Buddhists did so because they practice yoga or meditation, for instance, or claim affiliation with a Buddhist institution.

The report does not project membership figures for religious groups, in part because the survey is not as authoritative as a census and didn't count children, Lugo said. The U.S. Census does not ask questions on religion.