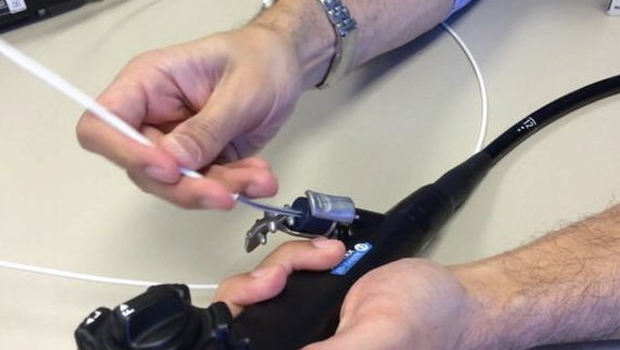 LOS ANGELES - The company that manufactured the medical devices tied to a deadly "superbug" outbreak is being investigated for possible violations of false claims and anti-kickback laws.

The Olympus Corp. of the Americas, an arm of Japan's Olympus Corp., disclosed Feb. 6 that it has been under federal investigation since 2011 for possible violations of laws that typically ban improper payments to doctors or other customers.

A company statement says Olympus is talking with the Justice Department to resolve the case, and it warns the company's financial results could be "adversely affected."

At least seven people have been infected with an antibiotic-resistant strain of bacteria after undergoing endoscopic procedures at Ronald Reagan UCLA Medical Center. Two of them died.

The patients were infected with the bacteria known as carbapenem-resistant Enterobacteriaceae, or CRE, after undergoing similar endoscopic procedures between October and January. More than 170 other patients also may have been exposed, hospital officials said.

The infections may have been transmitted through two contaminated endoscopes that were used to diagnose and treat pancreatic and bile-duct problems. The instruments were found to have "embedded" infections even though they had been cleaned according to manufacturer's instructions, said Dr. Robert Cherry, the hospital's chief medical and quality officer. Five other scopes were cleared.

The duodenoscope is a thin, flexible fiber-optic tube that is inserted down the throat to enable a doctor to examine an organ. It typically has a light and a miniature camera.

The hard-to-clean medical instruments are used on more than half a million people in the U.S. every year.

Olympus said in a statement that it emphasizes the importance of meticulous manual sterilization of its instruments. It says it is giving new supplemental instructions to users of the endoscopes and is working with federal officials on the infection problem.

The U.S. Food and Drug Administration issued an advisory Thursday warning doctors that even when a manufacturer's cleaning instructions are followed, germs may linger. The device's complex design and tiny parts make complete disinfection extremely difficult, the advisory said.

Between January 2013 and December 2014, the FDA received 75 reports involving 135 patients in the U.S. who may have been infected by tainted scopes.

In a statement, the FDA said it is trying to determine what more can be done to reduce such infections. But it said that pulling the device from the market would deprive hundreds of thousands of patients of "this beneficial and often life-saving procedure."

At UCLA, doctors first discovered the problem in mid-December when a patient underwent an endoscopic procedure and developed an infection that couldn't be treated with antibiotics.

CRE infections had been passed on from one "source case" patient between Oct. 3 and Jan. 28, Rubin said.