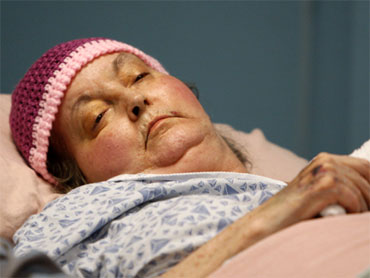 Susan Atkins, the terminally ill Charles Manson follower who admitted stabbing actress Sharon Tate 40 years ago, lost what was likely to be her last bid for freedom.

Atkins, who suffers from brain cancer, slept through most of the four-hour hearing Wednesday during which her husband-lawyer pleaded for her release and families of victims of the Sharon Tate-Labianca killings urged that she be kept behind bars until she dies.

In a dramatic moment - one of the few in which Atkins opened her eyes - Atkins' husband, James Whitehouse, led her through a recitation of the 23rd Psalm, with Atkins concluding in a strong voice, "My God is an amazing God."

Debra Tate, sister of the actress who was 8 months pregnant when she was killed, told the parole commissioners that she would have a 40-year-old nephew if her sister had lived. She said of Atkins, "I will pray for her soul when she draws her last breath, but until then I think she should remain in this controlled situation."

Parole commissioner Tim O'Hara said that he and the other commissioner who presided over the hearing, Jan Enloe, based their decision heavily on the "atrocious nature" of the 1969 killings and said that Atkins never fully understood the magnitude of her crimes.

O'Hara said Atkins would be not be eligible for parole for another three years.

Atkins, 61, had been expected to die of brain cancer over a year ago but continues to cling to life. She also had a leg amputated.

She was denied compassionate release in July 2008 after she was diagnosed and given only months to live. Wednesday's hearing at the Central California Women's Facility at Chowchilla was one of her required periodic parole hearings as a life prisoner. She stands convicted of the seven Tate-LaBianca murders, one of the most notorious mass murders in California history.

The gruesome murders that made the Manson cult infamous were discovered on Aug. 9, 1969, when a maid ran screaming from the home shared by Tate and her husband, director Roman Polanski.

Five people were killed in a ritualistic manner, including Tate, coffee heiress Abigail Folger, and celebrity hairdresser Jay Sebring. Two others were killed at another home. Polanski was not at home at the time of the slayings.

The next night, wealthy grocer Leno La Bianca, 44, and his wife Rosemary, 38, were found stabbed to death in their home across town

Atkins admitted stabbing Tate to death as Tate begged for her life and that of her unborn son. Atkins claimed she and other cult followers acted on orders from Manson and were on LSD.

It was Atkins who led police to arrest members of the Manson clan when she confessed to a cellmate after she had been arrested in a robbery.

At a hearing in 2000, Atkins acknowledged, "I sinned against God and everything this country stands for." She said she wanted to make amends for what she did.

Whitehouse, 46, has said his wife has made him a better person in their 21 years of marriage and should be released if for no other reason than to keep taxpayers from having to cover her hefty medical expenses.

Manson, Atkins and two other followers, Patricia Krenwinkle and Leslie Van Houten, were convicted and sentenced to death. The sentences were commuted to life when the death penalty was temporarily outlawed in the United States in the 1970s.

Although many life-term prisoners have come and gone from behind bars while Atkins has been incarcerated, none of the Manson killers has been paroled. Krenwinkle and Van Houten remain at the California Institution for Women at Frontera. They appear before parole boards every few years and ask for release. Manson, now 74, has stopped asking for parole.