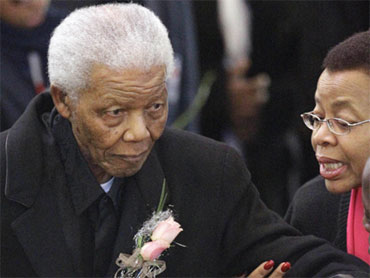 A somber and frail Nelson Mandela attended the funeral Thursday for his 13-year-old great-granddaughter, whose death in a car crash last week following the World Cup's opening concert marked a tragic start to the tournament.

The funeral came as disappointed South Africans faced the strong possibility they will become the first host nation to fail to reach the knockout phase of a World Cup.

Mandela, whose public appearances are increasingly rare, emerged stiffly from a car and leaned on a cane. The 91-year-old anti-apartheid icon was ferried in a golf cart to the brick chapel of the Johannesburg private school Zenani Mandela had attended and took a front pew.

Mandela's face was grave, though he broke into a smile at lighter moments during the service, including when a troupe of singers and dancers did a number in her honor. The service, which featured pop songs, hymns and a Maya Angelou poem, lasted about 2½ hours.

Mandela wore a corsage of pink roses on the lapel of his black coat. Other mourners also brightened black clothes with touches of pink — ties, scarves, flowers.

Police say a close family friend who was driving the car that crashed on a highway the night of June 10 could be charged with drunk driving and homicide.

After Zenani died, Mandela decided not to attend the tournament's opening ceremony and first game, as had been expected. Mandela, credited with sealing his country's bid to become the first in Africa to host a World Cup, largely retired from public life in 2004.

A private burial was held earlier Thursday. The public had been welcomed to the chapel service, and several hundred people attended, including an overflow crowd in a tent outside. Mandela's wife, Graca Machel, accompanied him. Also present was his ex-wife, Winnie Madikizela-Mandela, who is Zenani's great-grandmother; lawyer George Bizos, who had defended Mandela during the apartheid years, and Mandela's grandson, Mandla Mandela.

An anguished message was read during the service from Zenani's mother, Zoleka Mandela-Seakamela, daughter of Mandela's daughter Zindzi Mandela. Mandela-Seakamela said she wished she had indulged her daughter more, allowing her to sleep in late and wear make-up.

"I should have given you more hugs, more kisses," Mandela-Seakamela said. "If I did all this, would you come back to me, if only for a few seconds?"

If there were tears, there was also laughter as a playful, precocious child who liked Hannah Montana and the World Cup anthem "Waka Waka" was remembered.

Zweli Hlongwane, who was once married to Zindzi Mandela and remains close to the Mandelas, remembered the girl asking for a drum kit a few days before her death. She already played the saxophone and the piano.

She was "always looking for new challenges in life," Hlongwane said.

"I was truly blessed to have been able to say that we walked and laughed and got to play dress-up," Campbell said. "She will remain in my heart forever."

Zenani's classmates in school blazers each held a single white rose, and stood with other mourners to sing "Amazing Grace" as the funeral began before a montage of family portraits, including one of Zenani hugging Mandela, was projected on a screen as a recording of "Lean on Me" played.

Meanwhile, the mood in South Africa was somber after the country's World Cup team fell Wednesday night to Uruguay 3-0 and was clearly overpowered, barely making a shot on goal. Callers to a popular talk radio station Thursday morning were full of recriminations for Bafana Bafana's coach and players.

South Africa coach Carlos Alberto Parreira, a Brazilian who guided his own national team to World Cup glory in the United States in 1994, said "We have a moral obligation to fight to the very end against France, we can't put our heads down." If South Africa fails to beat France in its last group game it will become the first host in the 80-year history of the competition to go out in the first round.