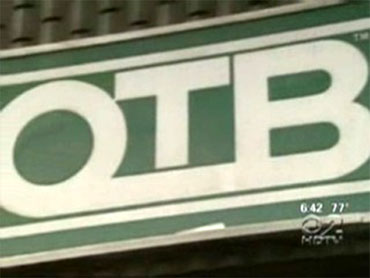 The term refers to people who pick up discarded betting slips at racetracks, hoping to find winning tickets.

One man has put his own spin on the practice and has found a way to make it pay off big time.

Like many who make a living in New York, Jesus Leonardo puts in long hours. He works hard but says it's all worth it. His "office" is an Off-Track Betting parlor on Manhattan's West Side, but he doesn't work for OTB and he never places a bet.

"I'm proud of what I do," Leonardo told CBS News station WCBS-TV.

His is job is highly unusual.

Watch video of Leonardo at work below.

Where some see trash, Leonardo sees opportunity. In each pile of garbage are hundreds of discarded betting slips. And while most of them are losers, invariably a few winners are thrown away by careless gamblers.

Leonardo has raised a family on what he earns and can pay a staff to help him sort and bundle the tickets.

It all started in 1999, after Leonardo mistakenly threw away a winning ticket. He panicked but OTB let him take home the garbage to find it. He didn't find his ticket, but he found two others worth $2,000. He figured he was on to something so he quit his day job driving a cab.

"I realized that it was easier and better for me than driving a taxi," Leonardo said.

Here's how it works: each ticket has a bar code. If it's a winner, Leonardo gets a voucher for cash. It's how he earns from $1 to $300 each day. But it's tedious work and long hours.

"It's not easy. You have to be patient. There's a lot of people that try to do it, and they throw the ticket away, and they are throwing money because they are not patient to finish," Leonardo said.

And he says a few times a year, he hits a jackpot.

Leonardo said he knows what he does is unique even for New York City standards. But he also said everyone can take something of value away from him and this most unusual profession.

"Everyone can learn from me that if they dedicate to something they have to know they cannot give up. They have to continue from A to Z," Leonardo said.

A spokesman for OTB said that "stooping" is against OTB policy. They also said that Leonardo is not technically a "stooper" because he doesn't pick the tickets off the floor, but collects the garbage each night from OTB offices.